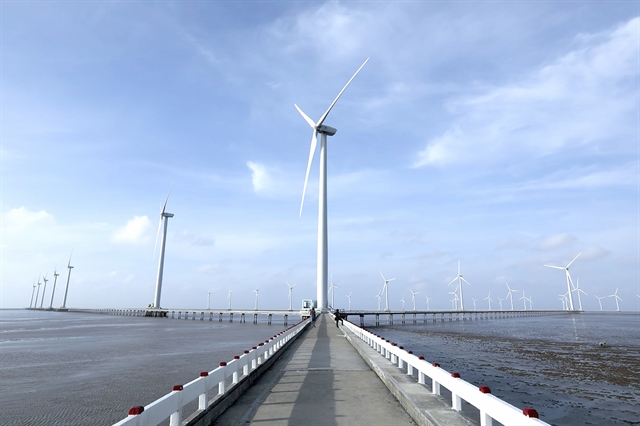 HÀ NỘI — Việt Nam has the opportunity to develop a pathway for inclusive, green growth that others can learn from, United Nations Development Programme Resident Representative Caitlin Wiesen has said.

Wiesen told the press on the sidelines of the launch of the Stockholm 50 National Consultations in Việt Nam in Hà Nội on April 13 that Việt Nam has recorded improvements on a number of the sustainable development goals (SDGs) related to the environment such as clean water and sanitation.

According to the UNDP official, the country has experienced “extraordinary” successful growth, with the exception during the COVID-19 pandemic.

She, however, stressed that it is absolutely vital for Việt Nam to build resilience in the ways that are environmentally sustainable, as it is one of the most climate vulnerable countries in the world.

The country can grow very rapidly and increase the percentage of renewables, Wiesen said, noting that in the 2018-19 period, there was extraordinary growth in solar and wind power.

However, for further growth and renewables, it is necessary to address some of the issues relating to the extension of the power grid and the reform of Vietnam Electricity (EVN).

“And this will be vitally important to phase out coal, moving forward and to increase the percentage and the mix of renewables and the overall energy consumption of Việt Nam which is vital to Việt Nam’s growth,” she said.

Wiesen also spoke highly of the commitments by Prime Minister Phạm Minh Chính at the 26th United Nations Climate Change Conference of the Parties (COP26) in Glasgow, the UK, especially the commitments to net zero emissions by 2050.

The UNDP official emphasised that although there are big challenges, the opportunities are large too, saying Việt Nam is “on a threshold of also planning a future way of growth that has not yet been fully experienced in the world.”

The event aimed to bring the views of the Vietnamese people to the global stage on the key challenges that people and the planet are facing.

The UN General Assembly has decided to convene a high-level meeting entitled “Stockholm 50: a healthy planet for the prosperity of all – our responsibility, our opportunity”, to define urgent, concrete actions that all people can take to protect the planet to ensure a strong, long-term foundation for a green, inclusive future. The meeting will be hosted by the Government of Sweden with the support from the Kenyan Government in Stockholm on June 2 and 3 this year.

In this regard, Wiesen pointed out the three messages of the Stockholm 50 National Consultations, including nature-based solutions, as Việt Nam is one of the most biodiverse regions in the world and the way in which development takes place will be very important to protect the environment.

The other messages lie with energy transition that is both inclusive and green, and the circular economy.

The UNDP representative noted the need to take a more coherent and integrated approach to the circular economy and change people’s mindset about how they use plastics.

She said the UNDP has worked with the Vietnamese Ministry of Natural Resources and Environment to launch a circular economy hub.

“We invite the private sector partners, donors, Government officials, people from civil society and NGOs to come together to share the best practices that they have, and how we can really create an economy that’s a vibrant economy for reusing plastics as well,” she said. — VnExpress News