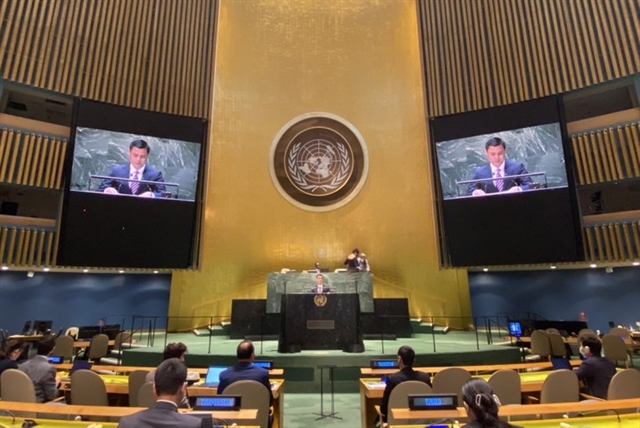 Ambassador Đặng Hoàng Giang, Head of the Permanent Delegation of Việt Nam to the UN, speaks at the UN meeting. — Photo VOV

HÀ NỘI — Ambassador Đặng Hoàng Giang, Permanent Representative of Việt Nam to the UN, has affirmed Việt Nam’s consistent support for every effort on nuclear non-proliferation, disarmament and denuclearisation on the Korean peninsula through peaceful measures in line with international law, including the UN Charter.

Speaking at a meeting of the UN General Assembly over a draft resolution of the UN Security Council on tougher sanctions on the Democratic People’s Republic of Korea (DPRK) on June 8 and 10, Ambassador Giang said Việt Nam always kept a close watch on the situation on the Korean peninsula.

Việt Nam disapproved actions that would escalate tensions and negatively impact regional peace and security, he noted, calling on relevant sides to exercise self-restraint, promote dialogues, and uphold achievements made in negotiations and meetings over the past years to seek long-term, comprehensive solutions, for their legitimate rights and interests, as well as for peace, stability and development in the region.

Việt Nam stood ready to contribute to efforts to promote dialogues and negotiations in this regard, and called on the international community to continue with humanitarian aid to the DPRK as the country was facing difficulties caused by natural disasters, diseases and other problems.

Many participating countries expressed their concern over the DPRK’s intercontinental ballistic missile tests, and called on the country not to repeat the acts.

They expressed a hope that the sides would soon resume dialogues and negotiations to seek long-term peaceful solutions for the Korean peninsula.

Russia and China that vetoed the resolution on May 26 explained their rejection at the meeting. — VNS