Việt Nam records $3.91b trade deficit in first half of February 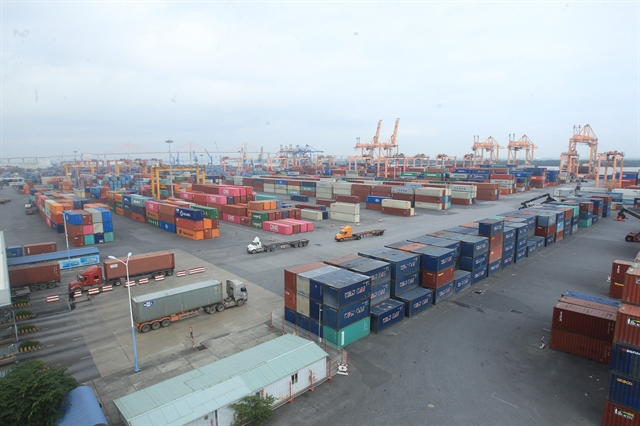 HÀ NỘI — Việt Nam reported a trade deficit of US$3.91 billion in the first 15 days of February as exports decreased, the General Department of Customs has announced.

In the first half of February, Việt Nam exported $8.75 billion worth of goods while its imports hit $12.66 billion. That brought the country’s total trade value since the beginning of the year to $81.68 billion. During the period, the country also saw a trade deficit of over $2.5 billion.

However, economists said that the trade deficit was not a worrisome figure as February was the time the Lunar New Year holiday fell. The country’s largest holiday lasted up to nine days, so the number of exported goods decreased.

From the beginning of this year to mid-June, two groups of imported goods saw a turnover of billions of dollars. They were computers, electronic products and components; and machinery, equipment and spare parts.

Nguyễn Thường Lạng from the National Economics University told Lao Động (Labour) newspaper that when imported goods were mainly equipment and raw materials to serve production, rather than consumer goods, the trade deficit should not be a cause for concern.

In the first months of the year, enterprises often ramped up their imports of input materials and spare parts to meet their production and export demands for later months, Lạng said.

According to the Ministry of Industry and Trade (MoIT), in 2022, Việt Nam’s exports would continue to face many difficulties and challenges with the biggest ones being the prolonged COVID-19 pandemic that might see complicated and unpredictable developments, affecting global production and trade, including in Việt Nam.

Other difficulties would be skyrocketing freight rates and high container rental costs and shortage of containers that would continue to affect export prices and reduce the competitiveness of Vietnamese exported goods.

In addition, the increasing trend of non-tariff trade protection barriers in many major market areas, the volatility of global commodity prices which has become unpredictable, or the risk of inflation, and currency appreciation would also affect exports.

The MoIT said in 2021, Việt Nam’s import and export turnover hit a record of nearly $670 billion, of which exports made a spectacular breakthrough with an increase of over 19 per cent. This was a bright spot for the economy in the context of the pandemic.

Although accounting for less than 10 per cent of the export value of the whole economy, agriculture was the sector that brought “new impetus” to export growth in 2021.

The minister attributed the results to good exploitation of foreign markets, which brought Vietnamese goods deeper into the global production and supply chain.

Vietnamese businesses had taken opportunities from free trade agreements, especially new-generation agreements such as CPTPP, EVFTA and UKVFTA, according to the ministry.

However, it said that there were still problems relating to imports and exports that should be dealt with.

The export scale had increased, but the added value was still low, it said, adding that many industries still exported raw and semi-processed products. In particular, the proportion of enterprises with domestic investment in total exports was still low. — VnExpress News