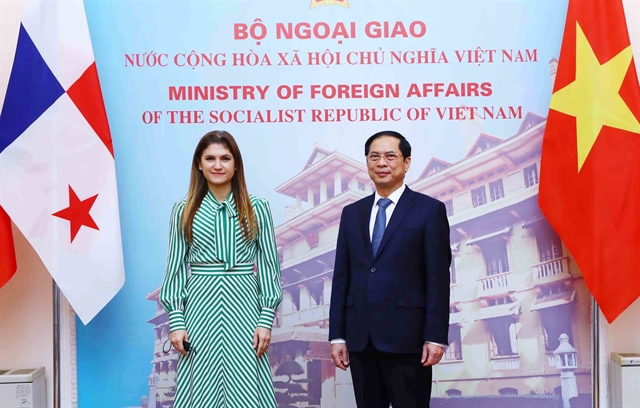 HÀ NỘI — The foreign ministers of Việt Nam and Panama expressed their wish to promote bilateral cooperation in fields that have much potential during their talks held in Hà Nội on Tuesday.

Panama foreign minister Érika Mouynes is here on a two-day official visit to Việt Nam at the invitation of her Vietnamese counterpart Bùi Thanh Sơn.

They also discussed measures to enhance cooperation in other fields, including politics, diplomacy, economy, trade and agriculture as well as cooperation at international forums.

The two ministers agreed on the viewpoints to settle international disputes by peaceful solutions on the basis of international law.

They noted that the relations between Việt Nam and Panama had been continuously strengthened and developed, particularly via the implementation of cooperation mechanisms.

They agreed to continue effectively promoting political consultancy mechanisms at foreign minister level as well as virtual and in-person meetings between the two countries amid the context of the COVID-19.

Achievements in economic cooperation between the two countries demonstrated that they have much potential in trade and investment cooperation. Panama is always among the top ten countries that Việt Nam has the biggest trade exchange with in Latin America. Two-way trade turnover increased from US$250 million in 2014 to over $467 million in 2021.

Minister Mouynes affirmed that the Government of Panama wanted to strengthen the relations with Việt Nam in its policy for the Asia-Pacific region.