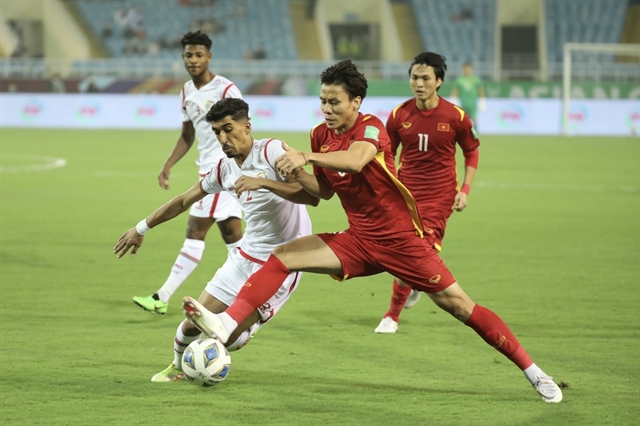 HÀ NỘI — Việt Nam finished their last home game of the 2022 World Cup Asian Qualifiers with a 1-0 loss to Oman on Thursday.

This result means that Việt Nam still sits bottom of the standings, their only three points from an earlier win against China.

Around 7,000 supporters came to the Mỹ Đình National Stadium to see Việt Nam play their last home game, supporters that tried to make up for some key absences among coach Park Hang-seo’s men due to injuries and COVID.

With Nguyễn Hoàng Đức, Phan Văn Đức, Lương Xuân Trường and Bùi Tiến Dũng out, coach Park had to bring in fringe players such as Bùi Hoàng Việt Anh and Nguyễn Tuấn Anh into the line-up. Neither started in the 3-1 win on Lunar New Year’s Day against China.

Việt Nam started the match with a great chance on the counter in the eighth minute. Quang Hải intercepted a pass from the Omani midfield and played a great through ball for Tiến Linh. At about 25 metres, the striker pinged off a shot that was deflected by an Omani defender and went just inches wide.

Oman replied with a vicious shot in the 20th minute. Al Aghbari’s shot had beaten Nguyên Mạnh but, luckily for Việt Nam, it went wide.

Oman had more possession and was in control of the latter part of the first half, but Việt Nam stayed strong and the first half ended goalless.

Việt Nam pushed forward again in the second half and won three successive corners as a result. From the third one, Thành Chung tried a bicycle kick but was tipped by Ibrahim Al-Mukhaini. Việt Nam called for handball for a block by an Omani defender, but after consultation with VAR, the referee said no.

Despite pressuring Oman with attack after attack, Việt Nam gave away a corner which Omani striker Khalid Al-Hajri capitalised on with a towering header that ended up in the net.

The men in red had multiple chances, the closest being Nguyễn Quang Hải’s free-kick that was acrobatically saved by Al-Mukhaini. Tuấn Hải and Công Phượng almost sent Mỹ Đình stands into a frenzy, but their efforts were disappointingly wide and Oman got away with three points at Mỹ Đình.

Việt Nam will face Japan in their final qualifier match on Tuesday, March 29, and will look to go out with a favourable result. — VnExpress News