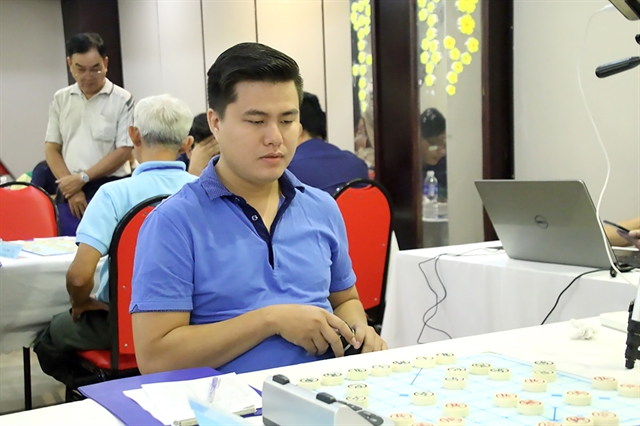 HÀ NỘI — This year’s SEA Games is the first time that Chinese chess has been included in the competition, and the Vietnamese team are determined to take advantage.

The gold medal hope in the men’s group rests on the shoulders of master Huynh, who is a ‘treasure’ of Vietnamese Chinese chess. He took the national title in 2014, 2016 and 2018.

In 2016, he was invited to compete in an all-Chinese team tournament. He also came second at the eighth Han Xin Cup Chinese chess International Masters in Sydney, Australia in 2016.

In 2010, Bảo took silver at the Asian Games. One year later, he won silver again in the team event and bronze in the individual event. At the national championship, he won gold.

In 2021, he returned to competition and had regular friendly matches with famous players at home and abroad. Through these matches, it became obvious he was extremely strong.

In this year’s national championship, Bảo came second behind Quang.

In the women’s group, Yến hopes to bring home a medal. She was a two-time runner-up in the World Championships as well as the winner at the fourth World Summit of Intellectual Sports in 2014, marking a turning point for Vietnamese chess. In 2016, she won the national championship in three categories.

Yến has played chess from an early age. She joined the chess team in HCM City’s District 3 at the age of 10. In 2007, when she was 15 years old, she won silver at the national chess tournament.

To prepare for the regional Games, Vietnamese players have honed their skills and gained experience in domestic events.

Tô Quốc Khanh, head of the Chinese chess section of the National Sports Administration, said that Vietnamese players are confident in competing at the Games and their goal is to strive for the highest possible results.

Coach Võ Minh Nhất said that all players have special personalities, but they are stable and in good form, so they are expected to gain great results.

Việt Nam’s opponents are mainly from Singapore and Malaysia, which have Chinese chess heritage. However, if Việt Nam plays confidently, they will not give their rivals a chance.

The Chinese chess tournament will begin on May 14 and last until May 20 in the northern province of Quảng Ninh. – VnExpress News