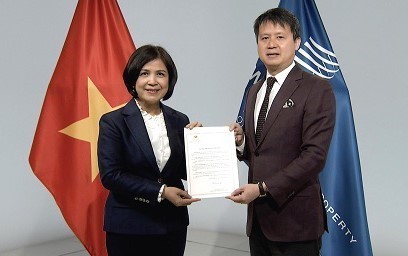 HÀ NỘI — Việt Nam’s accession to the WIPO Performances and Phonograms Treaty (WPPT) and implementation of the pact is expected to encourage the development of the local cultural industry.

That was the message from Ambassador Lê Thị Tuyết Mai, Permanent Representative of Việt Nam to the UN, WTO and other international organisations in Geneva.

In her statement at a ceremony on Saturday to hand over Việt Nam’s signed treaty document to Director General of the World Intellectual Property Organization (WIPO) Daren Tang in the Swiss city, the ambassador said the treaty will promote cinema and arts activities in contribution to Việt Nam’s socio-economic growth.

The WPPT deals with the rights of performers and producers of phonograms, particularly in the digital environment.

Tang congratulated Việt Nam on joining the WPPT, emphasising that the accession is a testament to Việt Nam’s strong response to its commitments to the global intellectual property system, while help strengthening the protection of the related rights.

The agreement is expected to also lead to increased employment and opportunities for the nation’s creative industry, he added.

On the sidelines of the event, Ambassador Mai met with Tang and two WIPO deputy directors general Sylvie Forbin and Hasan Kleib to discuss the implementation of cooperation contents agreed between Việt Nam and WIPO during the working visit of President Nguyễn Xuân Phúc to the organisation in November 2021. The WIPO leaders pledged to work closely with Vietnamese agencies to quickly and successfully implement content. — VnExpress News