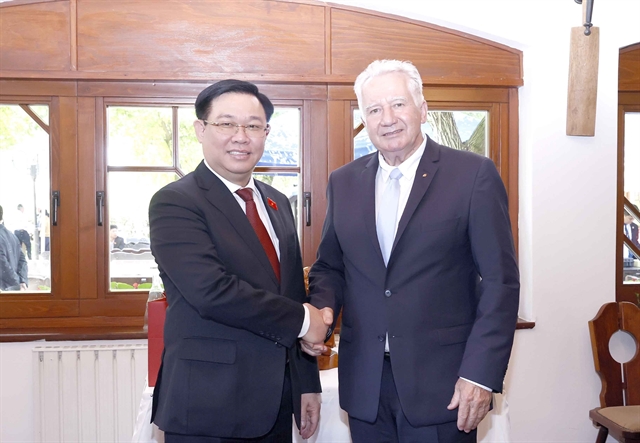 NA Chairman Huệ visited Albertirsa on Sunday after arriving in Budapest, the capital of Hungary, on Saturday afternoon (local time), beginning an official visit at the invitation of the Speaker of the National Assembly of Hungary, László Kövér.

The two sides stressed that the traditional friendship between the two countries has been strengthened by their leaders and people of different generations.

They affirmed that there is still ample room for the development of bilateral relations and that the visit will help to enhance Việt Nam and Hungary’s comprehensive partnership, of which the parliamentary ties are an important pillar.

Chairman Huệ expressed his delight that this is his first visit to Hungary as the top legislator and the first visit by a key leader of Việt Nam to Hungary during this term.

He appreciated the traditional friendship and multifaceted cooperation between Việt Nam and Hungary that have continuously developed over the past years.

Political trust has been strengthened by high-ranking visits and meetings between the two countries via all channels; the Party, State, National Assembly and people, according to Chairman Huệ.

Particularly, relations between the two countries were elevated to a comprehensive partnership on the occasion of the official visit to Hungary by Party General Secretary Nguyễn Phú Trọng in September 2018.

Cooperation in economy and trade between the two countries have also been promoted.

Việt Nam is a priority in the development and education cooperation of Hungary.

On this occasion, Chairman Huệ thanked the people of Hungary for supporting and assisting Việt Nam during its struggle for national liberation in the past and the current national construction and development.

Deputy Speaker of the Hungarian parliament István Jakab affirmed that Hungary is willing to share development values and experience with Việt Nam.

He said although agriculture accounts for just 12 per cent of Việt Nam’s economy, it is a pillar of the national economy. The country exported more than US$48.5 billion worth of agricultural products in 2021, but the added value of Vietnamese farm produce remained modest due to the low rate of processing.

Talking to the press on the threshold of the trip, Hungarian Ambassador to Việt Nam Ory Csaba said it will contribute to fostering the Việt Nam-Hungary traditional relations and promise to bring practical benefits.

Parliamentary relations between the two countries are also a very important area of Hungarian diplomacy, the diplomat stated. In the past two years, despite the impact of the COVID-19 epidemic, the two NAs still maintained virtually their organisation of conferences and seminars for parliamentarians to exchange experiences, he said.

The visit demonstrates the political resolve of both sides to promote parliamentary cooperation, particularly in building and completing a legal corridor to facilitate stable and long-term operation for their investors and businesses and promote collaboration in multiple areas.

Regarding the community of about 5,000 Vietnamese expatriates in Hungary, the ambassador considered them an important and dynamic bridge that links the countries together. — VNS