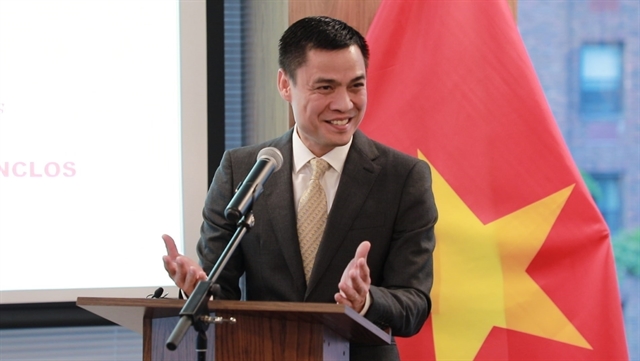 NEW YORK — Nearly 100 member states of the Group of Friends on the 1982 UN Convention on the Law of the Sea (UNCLOS) held a ceremony on June 14 (US time) to mark 40 years since the adoption of the convention.

The event, organised at the headquarters of Việt Nam’s Permanent Mission to the UN in New York, coincided with the group’s first anniversary (June 30) and the 32nd meeting of states parties to UNCLOS (SPLOS 32).

In his welcome speech, on behalf of the group’s 12 founding members, Ambassador Đặng Hoàng Giang, Permanent Representative of Việt Nam to the UN, said despite difficulties caused by the COVID-19 pandemic last year, the group still maintained regular activities in flexible formats.

He thanked all 115 member states for consistently supporting and actively taking part in common activities, affirming that the participation reflects their commitment to the group’s goal of upholding UNCLOS and international law.

Giang stressed his hope that amid many common maritime challenges facing the international community, the group will continue developing and contributing more to the world’s joint efforts in response to those challenges.

UN Under-Secretary-General for Legal Affairs and UN Legal Counsel Miguel Soares affirmed that UNCLOS is a comprehensive document that regulates all activities on seas and oceans and is a framework for international, regional and national cooperation in maritime issues.

He welcomed the group’s activities and expressed his hope that it will further bring into play its role at forums on maritime issues and help with ocean governance, the realisation of Sustainable Development Goal 14 on conserving and sustainably using the oceans, seas and marine resources, the maintenance of legal order for seas and oceans, and the peaceful settlement of disputes.

SPLOS 32 President Vanessa Frazier said that issues relevant to seas and oceans are attracting more attention from the international community.

Frazier said she hoped with a large number of members from their regions, the group will create an open and friendly forum for countries to discuss not only maritime issues but also others of common concern, thereby contributing to the full implementation of UNCLOS and SPLOS’s activities.

A group of friends is an informal and flexible form of coordination aiming to enhance cooperation among the countries sharing a common concern about a particular issue to promote common goals.

The 115-strong UNCLOS Group of Friends was the first initiated by Việt Nam, which lobbied for the establishment together with Germany and joined the team of 12 core members, Argentina, Canada, Denmark, Germany, Jamaica, Kenya, the Netherlands, New Zealand, Oman, Senegal, South Africa and Việt Nam. — VNS