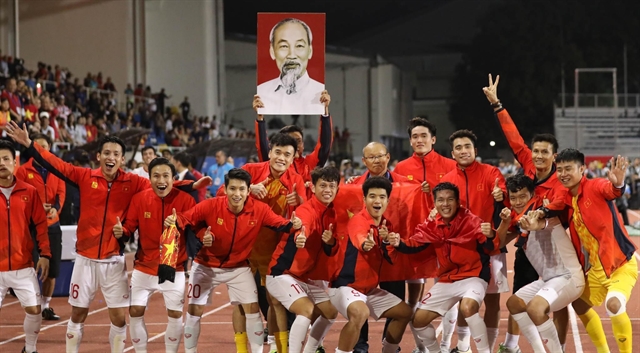 Việt Nam’s U23 team are expected to give their all to defend their SEA Games gold on home turf. Photo bongda24h.vn

HÀ NỘI — On April 7, one week after the end of their historic World Cup qualifiers, coach Park Hang–seo and his men will begin another journey — defending Việt Nam’s gold at the upcoming SEA Games 31.

At the last tournament the national team triumphed, thanks in no small part to the 64-year-old South Korean at the helm and that over-age players allowed to be selected under SEA Games regulations.

In the end, Dũng (25 at the time) and Hoàng (29) were chosen, though this year, three over-age players can be selected.

Throughout the tournament, both captain Dũng and Hoàng shone brightly, playing an extremely important role in leading their younger teammates to the first men’s footballing gold medal in 60 years.

As well as finalising the squad, finding quality opponents for friendly matches before the tournament is also a top priority.

According to the Việt Nam Football Federation, it is expected that the U23 team will attend an international friendly match with the U20 South Korean team on April 19 at the Việt Trì Stadium in Phú Thọ, where the team’s group A matches will take place.

However, the South Korea team has yet to accept the invitation due to strict COVID-19 prevention regulations.

The U23 Việt Nam finished 8th place out of 10 in the Dubai Cup 2022. The team, led by head coach Lee Young-jin, gained valuable experience against the under U23 teams of Iraq, Croatia and Uzbekistan.

The SEA Games 31 will be the last U23 tournament for coach Park before new coach Gong Oh Kyun takes over.

After the Games, Park will focus on leading the national team until his contract expires on January 1, 2023.

The draw for men’s football at the 31st SEA Games will be held at 10am on April 6. VnExpress News