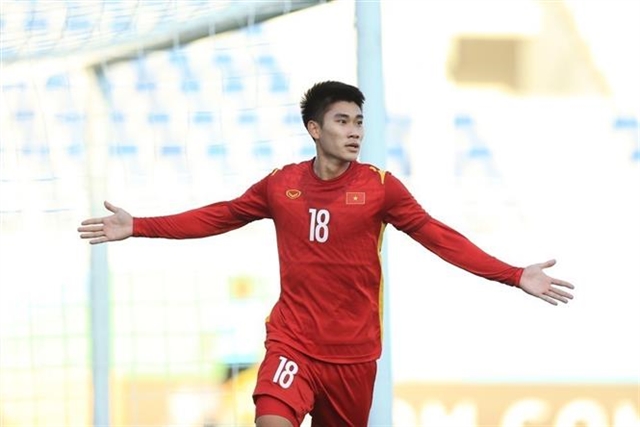 TASHKENT — Việt Nam are through to the quarter finals of the 2022 AFC U23 Asian Cup after a 2-0 win against Malaysia at the Lokomotiv Stadium in Uzbekistan on Wednesday.

The Golden Star Warriors secured their qualification for just the second time ever thanks to goals from Nhâm Mạnh Dũng and Bùi Hoàng Việt Anh.

Both Công and Nhân were handed their first starts of the competition.

The new blood in the Việt Nam side went to work quickly, with high presses right in the first minute. But the first dangerous chance went to Malaysia, when keeper Quan Văn Chuẩn was forced to clear the ball with his head outside the box.

The rebound reached Quentin Cheng, whose lobbed effort towards an empty goal went over the bar.

Malaysia had to replace one of their key player when Umar Hakeem limped off in the 17th minute, after he injured himself landing badly.

But Dũng and Việt Nam did not have to wait long for their glorious moment. On the 28th minute, Thanh Nhân’s speedy run down the left wing led to a cross for Dũng inside the box. The striker rose above the Malaysian defence and headed home the opening goal.

Malaysia immediately replied with a dangerous shot from Aiman Afif that blazed over the bar, but that was the men in gold’s last dangerous effort.

Only one minute later, Mạnh Dũng was through on goal and his lobbed effort went over the keeper and looked destined for the net but the Malaysian back tracked and made the save.

As the first half neared the end, Việt Nam pressed on and had chances for Hai Long and Mạnh Dũng. But the most dangerous effort came in the first minute of added time, when Quang Nho was through on goal. The Hải Phòng midfielder’s Cruyff-esque turn forced Hairley Hakim to make a sliding challenge, but the Malaysian defender touched the ball with his hand.

VAR immediately notified referee Dilan Perera and after five minutes of investigation, the Sri Lankan pointed to the spot and brandished a straight red to Hakim.

Captain Bùi Hoàng Việt Anh took to the spot kick, and although his penalty was saved, the rebound went straight to the defender to easily tap in for Việt Nam’s second goal. The first half ended with a comfortable 2-0 lead to Việt Nam.

Although with a one man advantage in the second half, Việt Nam could not find more goals.

As the clock ticked, Việt Nam passed the ball between themselves in a tiki-taka style putting their extra man to good use.

Malaysia faded and offered little in terms of a come back as the game drew to a close.

Elsewhere at the Bunyodkor Stadium, South Korea beat Thailand by one goal from Ko Jae-hyeon. With these results, Việt Nam and South Korea advanced to the quarter finals, with South Korea finishing in Group C’s first place and Việt Nam in second.

On Sunday the Golden Star Warriors will face Group D’s winner in the quarter finals, either Saudi Arabia or Japan. — VNS