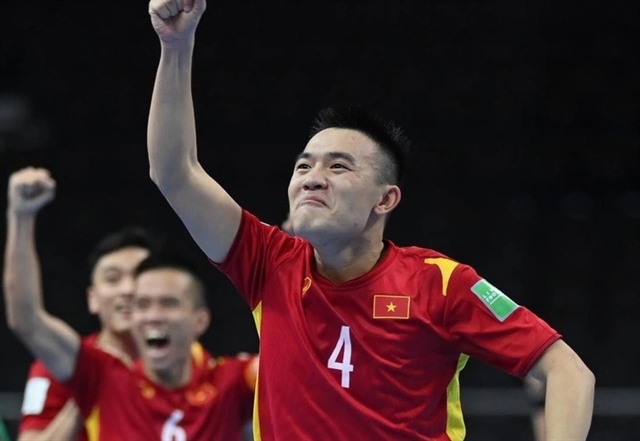 The Vietnamese futsal team will compete in the semi-finals of the AFF Futsal Championship after beating Australia 5-1 on April 6. — Photo Vocket FC

HÀ NỘI — Việt Nam beat Australia 5-1 to reach the semi-finals of the AFF Futsal Championship held in Thailand on April 6.

The Vietnamese players started slowly and Australia dominated in the first few minutes. After that, Việt Nam gradually regained control and created many chances. In the 14th minute, Thịnh Phát opened the scoring after a Đức Hòa dribbling effort and assist.

Thái Huy doubled the score with a shot that left the Australian goalkeeper stranded, with just a few seconds remaining in the first half.

In the 27th minute, Australia were awarded a penalty after a foul by goalkeeper Hồ Văn Ý. Daniel Fornito didn’t miss this opportunity to help Australia narrow the gap.

In the 34th minute, Thịnh Phát scored another goal to put Việt Nam 3-1 ahead after a pass from Nhan Gia Hưng.

The Australian team then deployed their power-play. However, Châu Đoàn Phát successfully won back the ball and increased the score to 4-1 in the 35th minute.

In the dying minutes, Văn Hiếu closed the match with a goal to make it 5-1.

In another match of Group B on April 6, Myanmar crushed Timor Leste 10-3 to top Group B and reach the semi-finals.

As the runners-up of Group B, Việt Nam will face the top team in Group A. — VnExpress News