Việt Nam-Australia relationship at its best ever: Deputy FM 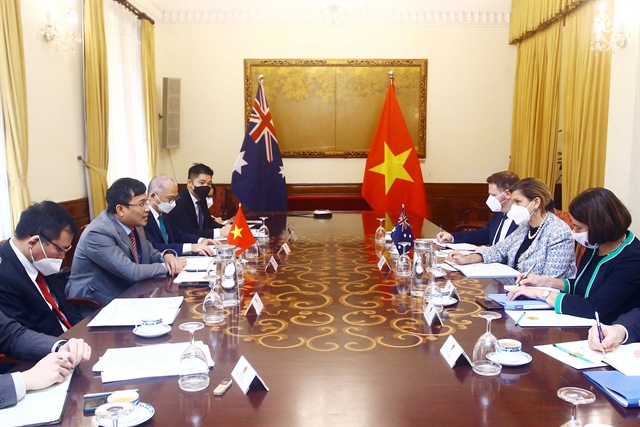 HÀ NỘI — The relationship between Việt Nam and Australia is developing strongly and at its best ever, Deputy Minister of Foreign Affairs Nguyễn Minh Vũ said on Thursday.

During his talks in Hà Nội with Katrina Cooper, deputy secretary for Southeast Asia and Global Partners Group at the Australian Department of Foreign Affairs and Trade, Vũ stressed that Việt Nam values its strategic partnership with Australia.

He thanked Australia for its timely supply of 7.8 million doses of COVID-19 vaccines and other medical materials, becoming Việt Nam’s second-biggest vaccine donor.

Cooper, who paid a visit to Việt Nam from March 2-4, said Australia appreciated Việt Nam’s role and position in the region.

She said Australia was making efforts to promote the strategic partnership in all cooperation areas, especially as the two nations will celebrate the 50th founding anniversary of diplomatic ties in 2023.

The two officials shared the view that despite the pandemic, Việt Nam and Australia have maintained all meetings, and regularly and flexibly implemented bilateral cooperation platforms.

Economic and trade collaboration continued to be a bright spot in bilateral relations, with two-way trade reaching US$12.4 billion in 2021, up nearly 50 per cent year-on-year.

They also compared notes on specific measures to enhance cooperation in such spheres as national defence-security, education-training, official development assistance, green growth, high-tech agriculture, climate change and Mekong collaboration, along with new pillars, towards the establishment of a comprehensive strategic partnership.

Regarding the East Sea issue, both officials held that disputes must be addressed peacefully in line with international law, particularly the 1982 United Nations Convention on the Law of the Sea.

They also exchanged views on other regional and international issues of shared concern. — VnExpress News