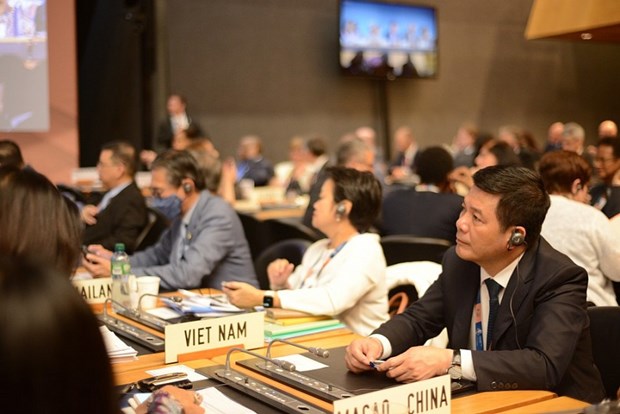 The Vietnamese delegation also included Ambassador Lê Thị Tuyết Mai, Permanent Representative of Việt Nam to the United Nations, the World Trade Organization and other international organisations in Geneva, and representatives from the Ministry of Industry and Trade, Ministry of Foreign Affairs, and Ministry of Agriculture and Rural Development.

Addressing the event, Diên affirmed support for the multilateral trade system and Việt Nam’s efforts to join with other WTO members to deal with global economic challenges.

However, the minister pointed out several shortcomings of the organisation, including internal ones identified during MC11 that had hardly been resolved.

“We should also be aware that it is now time for the WTO to undertake fundamental reforms to maintain and strengthen its three core pillars whilst adapting promptly to the profound changes and new requirements of the era. Never have we observed the issues on healthcare, environment, food security, and supply-chain disruption become more pressing and urgent than today,” he said.

“It is therefore imperative that the WTO members confront the root causes of these challenges and explore appropriate solutions so that the WTO can overcome them and continuously improve its operational efficiency.”

He said that the WTO should not be limited to providing an effective negotiating platform, but also a contributor to solving global crises, whilst maintaining and ensuring a level-playing field in world trade.

He highlighted that since joining the WTO, Việt Nam had been and would continue to be wholeheartedly committed to the multilateral trading system.

“We are ready to cooperate with WTO members in maintaining and strengthening the multilateral system with WTO at its core, in promoting and facilitating trade and investment, as well as in ensuring the vital supplies of goods and materials in the region and across the world. At the same time, Việt Nam is willing to stand with other members in ensuring sustainable development for the world economy, bringing inclusive benefits while striving to provide pragmatic support to the developing and least developed members,” he said.

Việt Nam attaches great importance to key WTO negotiations such as fisheries and agricultural subsidies, he said, expressing hope that the members would focus on topics of urgency and interest such as securing the supply of food and essential goods for the people.

At a discussion on trade and climate change on the sidelines of MC12, the minister underlined that climate change mitigation was an important factor in achieving equality in the world and held that the key issue is to achieve carbon neutrality while maintaining economic growth and improving living conditions for all, especially vulnerable groups.

He gave several proposals to speed up actions against climate change during trade activities. He underscored the need to consider specific conditions of each country to avoid the mechanical application of environmental standards in developed countries to developing countries, either directly or indirectly.

According to the minister, allying trade ministers on climate change can be a way to realise these goals, along with enhancing cooperation and discussion not only within the WTO but also in regional and bilateral collaboration frameworks.

At a meeting of Cairns Group, a coalition of 19 agricultural product exporting countries, Diên highlighted three issues that need to be prioritised – the application of trade-distorting subsidies or domestic support measures, affecting many important commodities such as sugar and other essential agricultural products; the application of special safeguards in agriculture that leads to unequal farm produce trade; and measures recently adopted by some countries following geopolitical and supply chain tensions, which directly threaten global food security.

The WTO Ministerial Conference is the organisation’s highest decision-making body, which takes place every two years. However, due to the impact of the pandemic, MC12 was postponed twice.

This was a good chance for the WTO to prove that trade is part of the solutions to many great challenges in the current era, whether public health or the environment. — VNS