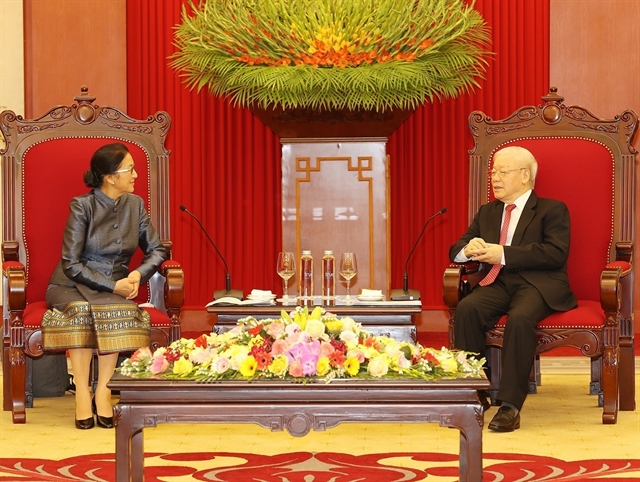 The Party chief made the statement while hosting a reception in Hà Nội for Vice President of Laos Pany Yathotou, who is paying an official visit to Việt Nam.

Trọng spoke highly of the visit to Việt Nam by the Lao delegation which he said demonstrated the special relations between the two countries, particularly as the two Parties and countries are implementing resolutions of their Party congresses.

He congratulated Laos for the achievements it has gained after more than a year of implementing the Resolution of the 11th National Congress of the Lao People’s Revolutionary Party (LPRP), in the context of the complex situation of the world and the negative impacts of the COVID-19 pandemic.

The Party leader said he believes that under the leadership of the LPRP, the Lao people will continue to gain huge achievements during the national reform, protection and development process.

He expressed delight at the growth of the special solidarity and comprehensive cooperation between Việt Nam and Laos, which have developed deeply, practically and effectively in all fields, making important contributions to the national construction and protection of each country.

He suggested the two countries boost cooperation mechanisms. Agencies, localities and businesses of Việt Nam need to improve cooperation efficiency with their Lao partners, he said.

Party chief Trọng stressed the importance of continuously strengthening and promoting Việt Nam-Laos relations for stability and development of each country, as well as for peace, cooperation and development of the region and the world.

Welcoming the results of talks held on Wednesday between the Lao Vice President and her Vietnamese counterpart Võ Thị Ánh Xuân, Party leader Trọng proposed the two countries actively implement agreements reached between high-ranking leaders of the two Parties and countries, including continuing to develop political relations, increase cooperation in national defence, security and diplomacy and promote the quality and efficiency of bilateral cooperation in economy, culture, education and science and technology.

For her part, Vice President Yathotou congratulated Việt Nam on its achievements gained recently and said the visit helped her to realise that Việt Nam continued to develop in many fields, in spite of the COVID-19 pandemic.

She expressed her belief that, under the leadership of the Communist Party of Việt Nam led by Party General Secretary Trọng, the Vietnamese people will continue to gain new achievements in the reform process and successfully fulfiling targets set by the 13th National Party Congress.

She also expressed delight at the development of special relations between the two countries, which have grown widely and deeply in all fields.

She thanked the Party, State and people of Việt Nam for their support for Laos.

She said that Laos will, together with Việt Nam, maintain and promote the special solidarity between the two countries. — – VnExpress News