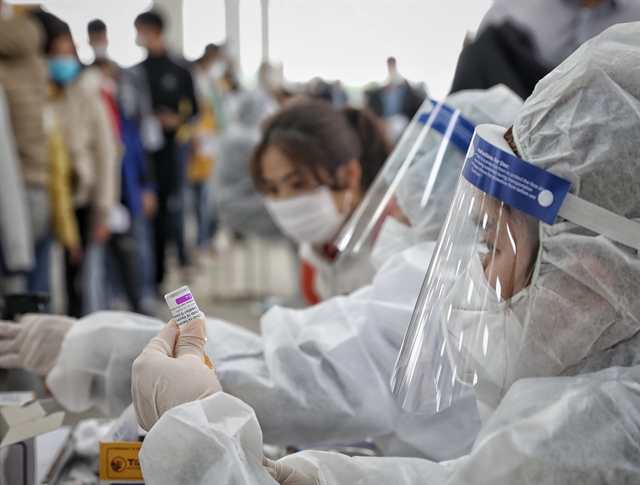 A health worker prepares a COVID-19 vaccine shot to administer to staff at a factory in the northern province of Bắc Giang on February 16, 2022. — VNA/VnExpress News Photo Danh Lam

HÀ NỘI — The very first dose of the COVID-19 vaccine was administered in Việt Nam on March 8, 2021. Now, one year on, the country has administered 198 million vaccinations and ranks as the sixth most highly vaccinated country in the world.

Coinciding with International Women’s Day 2021, the first hundreds of AstraZeneca vaccine were given to frontline female workers at the Hospital for Tropical Diseases in the northern province of Hải Dương , then the epicentre of a serious COVID-19 outbreak in the country, after a successful 2020 where caseload and deaths remained impressively low in Việt Nam.

In the first half of 2021, amid a critical shortage of COVID-19 vaccines on a global scale, the health ministry conservatively estimated that only by the end of the first quarter of 2022 would Việt Nam be able to secure the 150 million doses, via order and donation, that were needed to vaccinate 75 per cent of the roughly 98 million people in Việt Nam.

However, the fourth wave of infections that began in HCM City and the southern regions between June and October pushed vaccine diplomacy into overdrive. Leaders of the State and Government and the health ministry were actively involved in vaccine procurement, calling for donations and trying to get access to many types of vaccines from different partners and manufacturers, in order to get them to people as soon as possible.

As of March 6, 2022, Việt Nam had received 219 million COVID-19 vaccine doses, while it has administered over 198 million as of Tuesday, in what has been described as the country’s biggest inoculation drive in its history.

Nearly 100 per cent of the adult population in Việt Nam has now received at least one dose of vaccine, 98.7 per cent are fully vaccinated and booster dose coverage is 38.4 per cent.

The health ministry aims to complete the booster vaccine campaign in the first quarter of this year, allowing the country to further reopen in the new normal.

Almost all, 99 per cent, of children aged 12-17 years have received at least one dose of vaccine, while 93.8 per cent have been fully inoculated.

Việt Nam will soon be rolling out vaccines to children aged 5-11 years, as well as studying the need for a fourth dose.