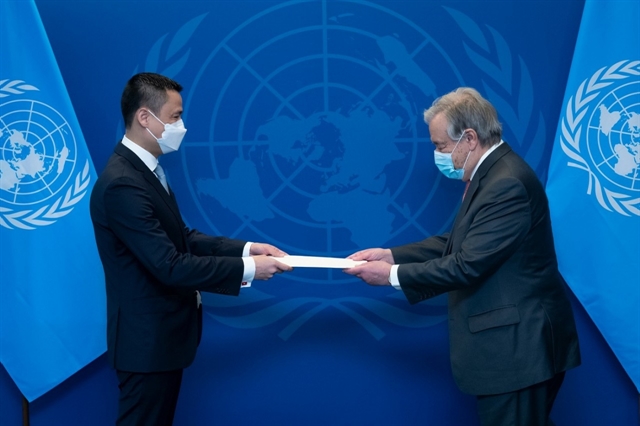 NEW YORK — United Nations (UN) Secretary-General Antonio Guterres has said that Việt Nam is a trustworthy partner of the UN, and described the country as a successful example of a developing nation, given its achievements so far.

Guterres made the remarks while receiving Ambassador Đặng Hoàng Giang, the newly-appointed Permanent Representative of Việt Nam to the UN, who came to present his credentials on February 25 (New York time).

The UN leader hailed Việt Nam’s capacity to perform important roles at UN agencies, including a non-permanent member of the UN Security Council in the 2020-21 tenure, and engaging in UN peacekeeping operations.

He expressed his hope that, during the office tenure of Ambassador Giang, Việt Nam would continue making effective contributions to UN forums and activities in New York, helping promote multilateralism based on the UN Charter and deepen the growing partnership between the UN and Việt Nam.

For his part, Ambassador Giang conveyed the regards of Vietnamese leaders to the UN Secretary-General, saying that Việt Nam is always a trustworthy and responsible partner of the UN.

He vowed to work hard to strengthen positive and active engagement, as well as the practical and effective contributions of Việt Nam to the international community, especially during the implementation of Sustainable Development Goals, climate change response and the maintaining of international peace, as well as to discussions on future cooperation orientations of the UN, such as the Our Common Agenda (OCA).

The ambassador said he hoped to cooperate closely with UN agencies in boosting collaboration between Việt Nam and the ASEAN with the UN.

Before his latest appointment, Giang was Deputy Minister for Foreign Affairs, beginning in March 2021, and also served as Chairman of the Việt Nam National Commission for the United Nations Educational, Scientific and Cultural Organization (UNESCO). — VnExpress News