US wants to work with Việt Nam towards a brighter future: Ambassador 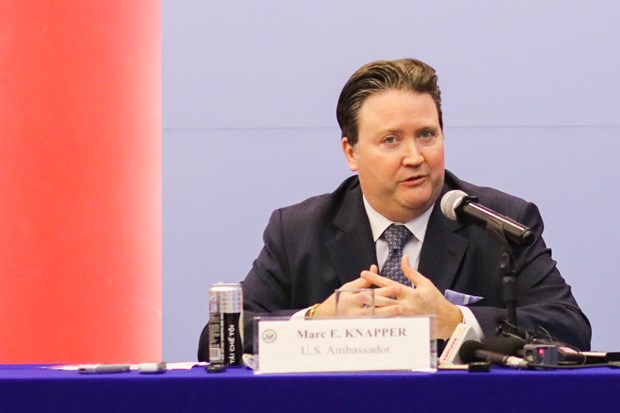 HÀ NỘI — Việt Nam is holding an increasingly important position in the region and the world, and the US wants to grasp every opportunity to join Việt Nam as it looks to the future, US Ambassador Marc Evans Knapper said on Wednesday.

Speaking at his first press conference since assuming the post in Việt Nam, Knapper said compared to the time he left Việt Nam 15 years ago, the capital city of Hà Nội and the country have recorded strong changes and development. Việt Nam has also played an increasingly outstanding role in the region and the world.

Highlighting the Vietnamese people’s hospitality that remains unchanged, he noted the two countries have expanded and developed cooperation in various spheres, including trade, investment, energy, healthcare, maritime security, and people-to-people and cultural exchanges.

The ambassador said one of the stepping stones for bilateral ties is that the two countries have been working together to deal with the consequences of war, including handling dioxin contamination hotspots, removing unexploded ordnance, and seeking those missing in action from both sides. It has helped lay the foundation for the Việt Nam-US relations, promoting reconciliation, building trust, and paving the way for the future.

The US Government recently announced the Indo-Pacific Economic Framework, an initiative expected to go beyond a free trade agreement through which the US will promote decarbonisation, boost supply chains’ resilience, and invite regional friends and partners to take part in this initiative, according to Knapper.

Việt Nam plays an important role in the Indo-Pacific Strategy of the US, he went on, expressing his hope that Việt Nam and other partners will join in new economic initiatives and increase cooperation in climate change, energy, and the development of a carbon-free economy.

Regarding economic relations, Ambassador Knapper said he has been actively interacting with the US-Việt Nam business community.

He also shared that one of his jobs is to ensure that US businesses have a level playing field and can compete fairly in Việt Nam. He said that American agricultural products, goods and services are among the best in the world.

On the other hand, he highly appreciated Vingroup’s investment in North Carolina. This not only shows confidence in US workers, the US economy and the business environment, but also the future of bilateral trade relations.

The diplomat said one of the priorities during his term is to elevate the two countries’ diplomatic relations, continue to reinforce trust with Việt Nam, and promote cooperation chances in different fields with the Southeast Asian country.

Regarding assistance for Việt Nam in coping with the COVID-19 pandemic, he noted that so far, the US has supplied nearly 40 million doses of COVID-19 vaccines to the country.

The US will continue cooperating with Việt Nam in COVID-19 response as long as it is necessary, he affirmed, adding that it still is ready to help if there is another global health crisis. — VnExpress News