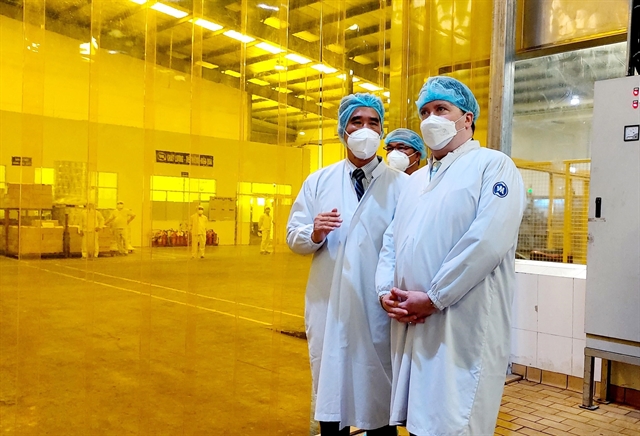 CẦN THƠ — US Ambassador to Việt Nam Marc Evans Knapper visited a factory of Việt Nam’s largest dairy producer Vinamilk in Cần Thơ on Friday during his trip to the Mekong Delta city.

He spoke highly of the development of Việt Nam’s dairy sector and Vinamilk’s investment in production technology in line with international standards at its Cần Thơ factory in particular and across the country.

The US diplomat highlighted Vinamilk’s growth against the backdrop of uncertainties brought by COVID-19, which helped stabilise the domestic market and obtain impressive export results.

In addition to support policies and dynamic trade promotion, efforts made by businesses had contributed to efficient economic cooperation between the US and Việt Nam over the years, he added.

Vinamilk boasts a large-scale network comprising 16 factories and 14 farms of international standard at home and abroad, including one in California, US.

The 2ha-factory in Cần Thơ opened in 2001 and is capable of producing more than 202,000 tonnes of products per year.

Its director Phạm Minh Dương said despite the adverse impact of the pandemic last year, the factory maintained its supply chain and produced dozens of tonnes of fresh milk each day for Cần Thơ and neighbouring localities, thanks to effective COVID measures.

Vinamilk is among the 40 largest dairy producers in the world in terms of revenue. Its products have been shipped to 57 countries and territories, including major markets of the US, Japan and China, with an export turnover in excess of US$2.6 billion.

The company purchased milk powder, cows and equipment from the US worth nearly $306 million from 2019 to 2021. — VnExpress News