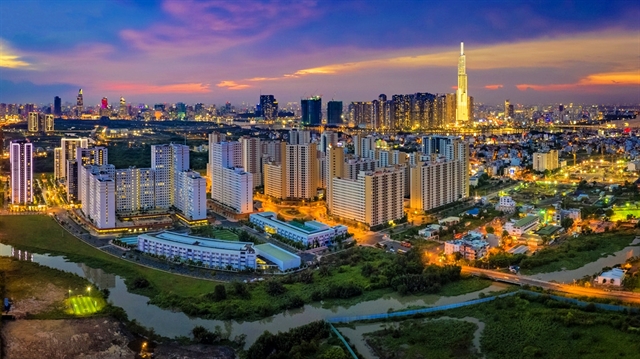 A corner of District 2 in HCM City. — VNA/VNS Photo

HÀ NỘI — The process of urbanisation is an important driving force for rapid and sustainable socio-economic development in the future, with urban areas slated to form a greater part of the country’s economy in the next few years.

Therefore, all levels of Party committees and Party members are told to focus on planning, construction, management and sustainable development of urban areas in Việt Nam by 2030.

Politburo member and permanent member of the Party Central Committee’s Secretariat Võ Văn Thưởng made the statement on Wednesday morning when he chaired a conference to direct the implementation of Resolution No. 06-NQ/TW, which is related to the country’s urban areas.

At the conference, Thưởng told the Government’s Party Personnel Committee to soon issue an action plan to quickly implement the resolution.

The action plan must have specific roadmaps and assignments; concreting the resolution’s targets into the annual plans of the relevant sectors, localities and agencies, he said.

Besides, the action plan should be suitable for each locality and each region in the country, he added.

The implementation of the resolution of the sectors, localities and agencies must be assessed periodically, he said.

“If we implement the resolution without drastic measures, the results will not be as expected,” he said.

Moreover, he said that it needs to focus on perfecting the legal system; promulgating mechanisms and policies with breakthroughs for sustainable urban development, and promoting economic growth in urban areas quickly and effectively.

It is necessary to strengthen decentralisation for urban governments in association with upholding responsibility to better serve urban management, he said.

The sectors, localities and agencies also have to seriously follow six groups of solutions mentioned in the resolution.

The solutions consist of perfecting institutions and policies to facilitate the process of urbanisation; improving the quality of urban planning; focusing on building and developing urban areas in a sustainable manner; promoting the development of urban infrastructure adapting to climate change; improving the urban government model; and enhancing the efficiency of urban management and the quality of urban residents’ lives.

The resolution is an important political basis for the birth of new mechanisms and policies, creating a driving force for urban development, and making an important contribution to promoting sustainable socio-economic development, he said.

On January 24, the Politburo issued Resolution No. 06-NQ/TW on planning, construction, management and sustainable development of urban areas in Việt Nam by 2030.

The resolution said urban planning, construction, management and development in Việt Nam have achieved many significant results after 35 years of đổi mới (renewal process), especially over the past ten years.

Urban space has been expanded. Technical infrastructure and socio-economic infrastructure have been invested in an increasingly synchronous and efficient direction. The quality of life of urban residents has been gradually improved.

However, the process of urbanisation as well as planning, construction, management and urban development still have shortcomings. The urbanisation rate is still lower than the target set out in the Socio-Economic Development Strategy in 2011-20 and far from the average rate of the region and the world.

The quality of urbanisation is not high, urban development has caused waste of land and the level of economic concentration is still low.

The resolution also sets out specific goals such as the rate of urbanisation will reach at least 45 per cent by 2025 and over 50 per cent by 2030.

Along with that, the urbanisation rate is set to be in the middle and high level in ASEAN and Asia by 2045.

The urban areas will be linked synchronously among the three regions. They will be capable of coping with and adapting to climate change, preventing natural disasters and diseases as well as protecting the environment. — VNS