Tuệ Tĩnh Hospital delays pay for staff due to pandemic 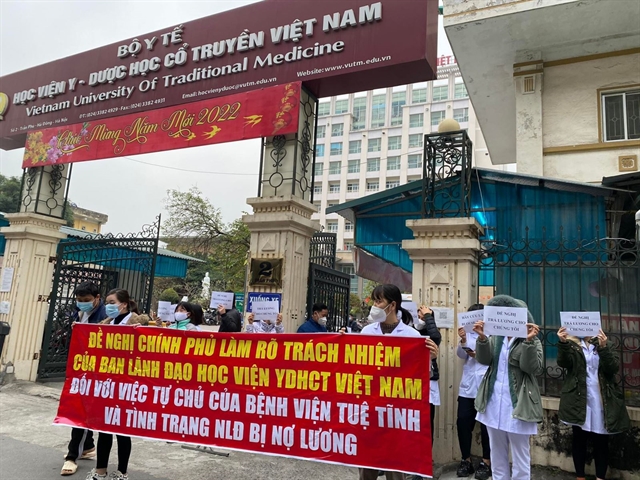 Medical staff, who have not received a full salary in eight months, hold a banner in front of Tuệ Tĩnh Hospital on Thursday.— VNA/VnExpress News Photo Tạ Nguyên

HÀ NỘI — Đặng Thị Thu Hiền, 35, is a medical worker in the Internal Medicine Department at the Hà Nội-based Tuệ Tĩnh Hospital. On Wednesday, she held up a banner alongside 40 of her colleagues in front of the hospital after not receiving a full salary in eight months.

Hiền, who has 12 years of working experience at the hospital, said she used to receive about VNĐ6.6 million (US$291) each month.

However, her salary was cut in half between May and November 2021. The hospital has yet to pay her December salary either, she said.

There was also no bonus for the New Year or other holidays, she said.

“I have no money to cover my living expenses,” she said. “My life is very difficult.”

Although Hiền and her colleagues had complained to the hospital leaders many times, the issue has yet to be resolved.

“We have no choice, we have to call for help,” she said.

Trần Hồng Minh, a nurse of the Internal Medicine Department, said she has to stay at a relatives house in Chương Mỹ District, about 20km from the hospital, for eight months because she has no money to hire a rented room near the hospital.

“It’s really hard for me. I have no money to raise my children,” she said.

Bình said the hospital is one of three units under the Việt Nam University of Traditional Medicine. The hospital has been operating with financial autonomy since 2019, without collecting the opinions of staff.

The hospital’s revenue depends on the examination and treatment of patients, she said.

However, that revenue is believed to have been sharply reduced due to the COVID-19 pandemic.

It is one of the causes of the current situation, she said.

Nguyễn Quốc Huy, director of the Việt Nam University of Traditional Medicine, said the pandemic, especially, the fourth wave, has greatly affected the operations of the hospital.

Due to the pandemic, the hospital had to deploy many solutions such as reducing the number of patients and limiting the admission of non-emergency patients, he said.

“The revenue is not enough to cover regular operating expenses but we still gave priority to pay salary to our staff,” he said.

Despite the sharp reduction in revenue, the hospital still had to spend much on implementing regulations on pandemic prevention and control, such as buying medical protective clothing, antiseptic solutions and paying expenses to send staff to HCM City and Bắc Giang as ordered by the Ministry of Health, he added.

“Due to all of these difficulties, from May 2021 until now, the hospital could only pay a half of salary for the staff, leading to many difficulties in their lives,” he said.

Huy said the university already proposed a plan to handle the problem to the health ministry.

“We are waiting for direct instructions from the ministry,” he said.

In a related movement, Minister of Health Nguyễn Thanh Long yesterday had ordered the university’s head and the hospital’s head to work with relevant agencies of the ministry to completely handle the problem, ensuring the benefit of the labourers.— VnExpress News