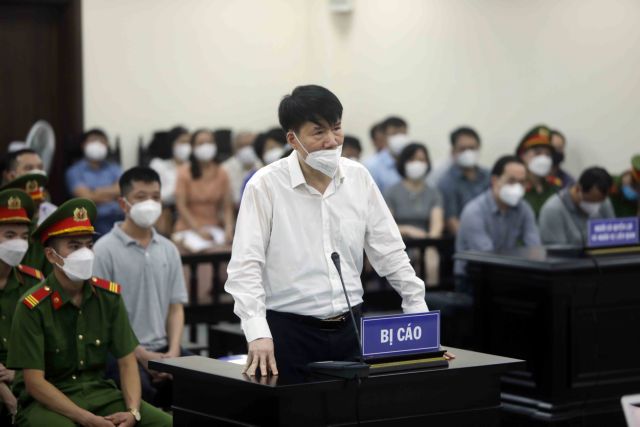 The court has summoned six organisations and individuals, including representatives of the Ministry of Health, the Drug Administration of Vietnam, the General Department of Customs, HCM City’s Customs Department, VN Pharma Company, H&C International Maritime Trading Co.Ltd. About 30 witnesses were present at the trial.

There are more than 30 lawyers participating in defence for the defendants. Trương Quốc Cường alone has six lawyers.

According to the indictment, Nguyễn Minh Hùng, chairman of the Board of Directors and General Director of VN Pharma Company and his accomplices prepared applications for seven drugs labelling Health 2000 Canada for circulation in Việt Nam from 2008 to 2010. The drugs were later approved despite their fabricated documents.

After that, Hùng and others accused traded and imported a large number of counterfeit drugs for domestic consumption, causing economic and health problems to patients.

The defendants faked a range of documents to change the origins of the drugs to import 838,000 boxes into Việt Nam. Of that, 624,000 boxes were then resold to drug stores, hospitals and pharmaceutical businesses, bringing a profit of more than VNĐ31.5 billion ($1.3m) to the defendants.

Cường, who worked as head of the DAV from 2007 to 2016, had improperly and inadequately performed his assigned responsibilities, lacked responsibility in assessing and granting licences for the drugs, and lacked supervision and examination over those assessing and registering the drugs, leading to the approval of the applications for the import and consumption of the six counterfeit drugs worth over VNĐ 148 billion (US$6.4 million) in Việt Nam.

On August 2014, the DAV sent two emails to the Canadian Embassy in Việt Nam to verify information about four Canadian pharmaceutical companies operating in Việt Nam, including Health 2000 Inc and Helix Pharmaceuticals Inc.

As a result, these companies did not have any products licensed for circulation in Canada.

Cường received information about the suspected origins of the drugs but did not give direction to stop their circulation or recall and destroy them.

On November 13, 2014, Cường directed the DAV’s deputy director Nguyễn Việt Hùng to send a document to the Ministry of Public Security’s Department of Internal Political Security to require the verification of information about Health 2000 Canada. He also asked the DAV’s deputy director Nguyễn Tất Đạt to send a document to the General Department of Customs to suspend the import of drugs manufactured or supplied by Health 2000 Canada into Việt Nam.

The import of the drugs was officially suspended on December 1, 2014.

Previously, on November 21, 2014, the Department of Internal Political Security sent an urgent document warning Cường about the drugs manufactured by Health 2000 Inc, which had the same violation on counterfeit products as those of Helix Pharmaceutical Inc.

Cường did not perform properly despite receiving many warnings about the drugs.

As a result, domestic medical establishments continued to use supplied counterfeit drugs labelled Health 2000 Canada without clear origins, including H2K Levofloxacin, H2K Ciprofloxacin, Kaderox-250 and MGP Moxinase-625, to treat patients at a total value of over VNĐ3.7 billion ($160,190).

The trial is expected to last a week. — – VnExpress News