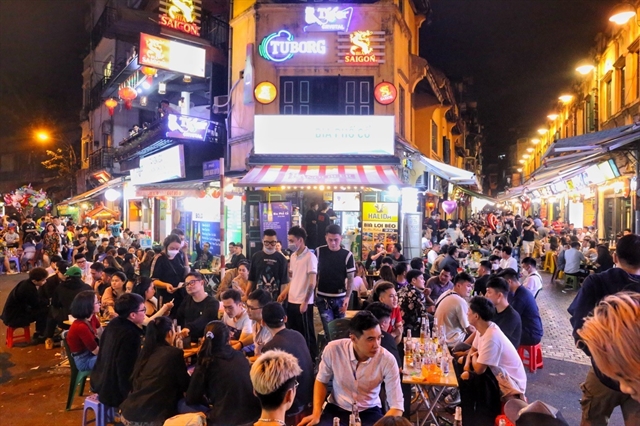 HÀ NỘI — More than ten days after the official reopening of Việt Nam’s tourism sector, localities and businesses are putting all hands on deck to prepare for the summer travel season and revive the industry.

As tourism activities resume, ‘Hà Nội Tourism 2022’ was launched over the weekend at the Octagonal House at Lý Thái Tổ Garden. With the theme ‘Get on Hà Nội 2022’, the event took place from March 25 to 27 with a series of activities to welcome tourists back to the capital.

One of the event highlights was a hot air balloons festival at the Long Biên longan garden, the area along the Red River and the foot of Vĩnh Tuy Bridge in Long Biên District.

A total of 22 colourful hot air balloons, including 18 level-one balloons of 10-metre high and four level-seven of 22-metre high, flew above the Hà Nội skyline.

Meanwhile in Ba Vì District on the outskirts of Hà Nội, a local tourism campaign will be launched on April 16. With the theme ‘Ba Vì Tourism – Green and safe experience’, the event will focus on eco-tourism, leisure travel, and spiritual culture for this upcoming summer.

According to Đặng Hương Giang, director of Hà Nội Department of Tourism, the capital city has attracted more than 2.8 million local tourists in the first quarter of 2022, equivalent to a 45 per cent increase compared to the same period last year.

This is the basis on which events and products stimulating demand will be created to revive the tourism industry, while also ensuring safe adaptation and flexible, effective control of COVID-19, she added.

HCM City has also been putting in the effort and scaling up inter-provincial and inter-regional partnerships with more than 40 cities and provinces, which are in the Mekong Delta, the Northwestern, Central, Southeast regions and the Central Highlands.

“Expanding partnerships to other regions across the country will help bring tourists to these provinces, while also welcoming tourists in provinces to HCM City. Therefore, the tourism sector and ecosystems will flourish even more.”

The northern province of Quảng Ninh has also been focusing on tourism partnerships, reopening programmes, stimulating policies, support for businesses, and training human resources for the tourism sector.

The province’s goal is to welcome 10 million visitors in 2022, of which 1.5 million are international tourists. The revenue from tourism is expected to be VNĐ21 trillion (US$918 million).

The central city of Đà Nẵng has also followed the guidelines of the Ministry of Culture, Sports and Tourism to give its tourism industry a boost while also ensuring safety measures against COVID-19.

On March 27, the city welcomed the first international flights from Singapore and Bangkok.

Nguyễn Xuân Bình, deputy director of Đà Nẵng tourism department said: “This summer, Đà Nẵng will focus on local tourists, and especially the partnerships with provinces in the central region to create new tourism products, which combine marine tourism with cultural and eco-tourism.”

With their campaign of developing Thanh Hóa Province into a safe, friendly, attractive destination, the local authorities have set up the goal of welcoming more than 10 million tourists in 2022, of which 440,000 are from overseas. The total revenue is expected to be nearly VNĐ18 trillion (US$787 million).

As part of the inter-provincial partnership with HCM City, the southern Bạc Liêu Province recently held an agreement signing ceremony between the city and 13 localities of the Mekong Delta, alongside its tourism campaign launch.

On the national scale, Việt Nam Tourism Association has teamed up with the National Administration of Tourism to host Việt Nam International Travel Mart (VITM) 2022, with numerous promotions and activities to offer.

Taking place from March 31 to April 3, the event will welcome travel businesses and tourism management agencies from 52 cities and provinces across Việt Nam, as well as from six other countries and territories. 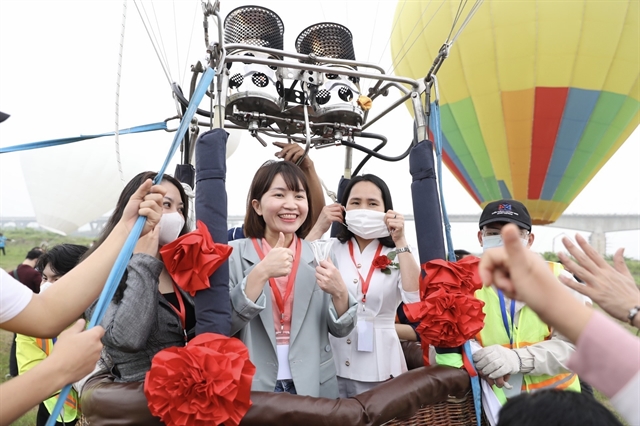 For travel agencies, this period of time is also an opportunity for them to revise their products and human resources in preparation for international tourists.

Lê Nguyên Long, director of Asia Plus Tours said: “The reopening of tourism and health, visa requirements receives generally positive responses from our customers and partners.”

“It is expected that the first groups of tourists will arrive in June, and the number of customers will stabilise by the end of the year.”

In the near future, these agencies will focus on the summer vacation with local tourists, especially for the holiday breaks in April and May. International travel season will begin from September onwards.

Phùng Quang Thắng, director of Hanoitourist said: “This sort of rotation will ease the load for the tourism industry when human resources remain insufficient.

“Therefore in this period, in addition to reviewing the infrastructure, businesses also hope that the State and local government will provide support in terms of staff training for the sector.”

Nguyễn Thị Lê Hương, deputy director of Vietravel also added that now is the time for government agencies to coordinate with all stakeholders in the industry. The objective is to launch a communication campaign with a coherent message both in the country and abroad.

Chairman Nguyễn Trùng Khánh of Việt Nam National Administration of Tourism said: “Domestic travel now no longer has any restrictions. Despite the outbreak, there is still a large number of local tourists, which proves that safe travel activities have been going in the right direction, and that we are ready for tourism reopening.

“Việt Nam has set the goal to welcome 60 million local and five million international tourists in 2022, which is completely feasible.”

In the immediate future, the administration will continue its campaign “Live fully in Việt Nam”, which is being deployed across the country’s tourism website and media channels.

Alongside human resources development, the National Administration of Tourism is also looking into improving technology applications for tourists, businesses and localities. — VnExpress News