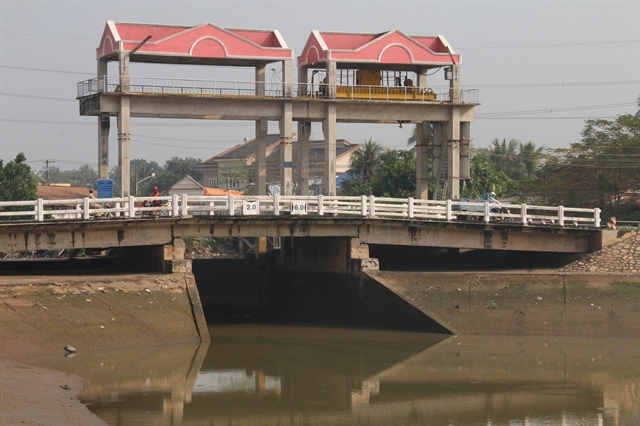 It plans to build a steel dam to store freshwater on each of eight important irrigation canals, Nguyễn Tấn Thành, Ông Hổ, Cầu Sao, Rạch Me, Mỹ Long, Chín Tương, Bà Trà, and Ông Mười, according to its Department of Agriculture and Rural Development.

It will repair sluices on Rạch Chợ, Thủ Ngữ, Ông Thiệm, and Cầu Kênh canals to enhance their capacity to keep out saltwater and store freshwater.

Tiền Giang, the country’s largest fruit grower, is one of the delta’s provinces hardest hit by saltwater intrusion from the sea.

The province People’s Committee has also instructed localities to dredge 75 irrigation canals that are in fields and build 19 saltwater prevention sluices. These will cost the districts a total of VNĐ56.9 billion ($2.5 million) and be completed before the end of this dry season.

It has called on the public to use irrigation water efficiently and store it in fields, ponds and other places.

The Tiền Giang Irrigation Work Exploitation and Management One Member Limited Company is monitoring saltwater intrusion around the clock and publishing the data in the media.

The Department of Agriculture and Rural Development has instructed farmers to immediately harvest their ripened winter – spring rice crop to escape saltwater intrusion.

It has encouraged rice farmers in areas without irrigation to switch to other crops that require less water.

Saltwater intrusion in the Tiền River, a tributary of the Mekong, and high tides are combining to contaminate farming areas since February 1. – VnExpress News