The correspondents who worked at COVID-19 epicentres 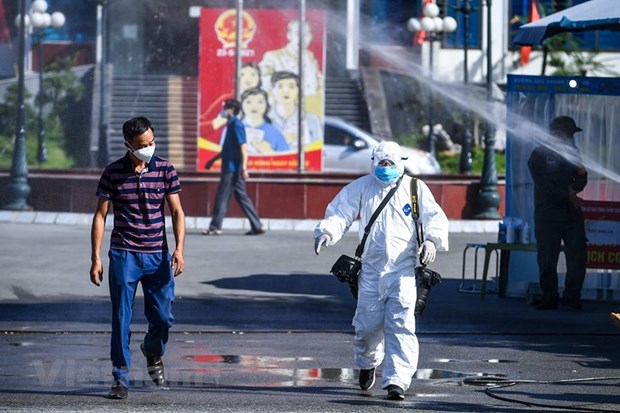 A reporter wears a protective suit to go to work. —VNA/VNS Photo

HCM CITY — COVID-19 not only put a halt to all activities in society and changed the lives of many people, but was also a fierce battle for reporters covering the historic era.

When HCM City became the country’s epicentre of the pandemic in 2021, hundreds of reporters from press agencies dedicated themselves to working between the lines of life and death.

In mid-July, 2021, when the pandemic really ramped up in HCM City, tens of field hospitals were set up to treat COVID-19 patients. During that period, while residents were requested to stay at home, frontline workers were mobilised to enter the fight against the pandemic.

“When I first saw photos of the field hospitals, I felt that I could not sit still. The frontline workers were working so hard, why didn’t I accompany them? I can become an information soldier in the fight against the pandemic,” said Lê Trường Giang from the HCM City Television (HTV).

Giang decided to follow his instincts. He asked for permission to go to Field Hospital No 6 to work.

“In the first days at the Field Hospital No.6, I had no time to fear. Witnessing how medical workers and soldiers carried equipment and medical materials to turn the resettlement area into a field hospital to treat COVID-19 patients, I realised that this is exactly where I must be, to record these historical moments,” Giang said.

Although having such high determination, there were times the young man still felt fear in the face of the fierceness of the pandemic.

When covering the operation of the hospital’s intensive care unit where patients in critical conditions were treated, Giang saw an old woman with COVID-19 on a ventilator. After he finished recording, when he was going to leave, the woman died.

“I am dumbfounded. Just 10 minutes ago, I still saw her breathing. But then…,” he said.

As a television reporter, Giang worked at the field hospital alone without assistance from any colleagues. He had to take charge of all roles, including directing, filming and editing, as well as getting involved in sound and post-production. It was also inconvenient for Giang to work in the protective suit.

“Sometimes, I was too hurried to set up equipment properly, so I lost all sound for the recording and could not record those moments again,” Giang said.

After three months of working at the field hospital, three episodes of the documentary by Giang, titled “HTV from the epicentre,” were completed and left deep emotions among viewers after going on air.

Being proud of his products, Giang said: “Through the films, people can clearly feel the hearts of medical workers. They do not only treat patients but also use their sentiments and conscience to help patients.”

“Those days of the fourth wave of the COVID-19 pandemic are hard to forget when I had to work and live at the epicentre,” Phan Thanh Vũ, a correspondent of Vietnam News Agency in HCM City.

The fear kept increasing when most reporters were present at hotspots of the pandemic, without being vaccinated.

There were days when Vũ received phone calls saying that he had become an F1 as he had close contact with people with COVID-19 after travelling to find stories and interviews. Some days there were more than 50 reporters working together in the same place and they forgot to keep distance, leading to a high risk of infection.

“In those days, our mood was like we were riding on a rollercoaster without knowing what our fate would be. But, even if I became F0, I would not give up my mission because I know that readers and people still wait for news and photos about the pandemic from us,” Vũ said.

Like many other reporters, reporter Lê Quang Huy from Sài Gòn Giải Phóng (Liberated Saigon) newspaper volunteered to go to work at hospitals and isolation areas.

Huy could not remember how many times he entered areas where COVID-19 patients were treated. For more than three months, he could not meet his wife and children as he was afraid that he would ‘bring the virus home’.

During that time, Huy often stayed up until 1 or 2 am to wait for information and was ready to go to the scene at any time. There were days he worked all night to publish a story on time.

“There were days I finished working at 3-4 am. I realised that I was so hungry because I did not have time to have dinner. However, all tiredness was gone when I knew that information about the pandemic reached readers,” Huy said.

At the epicentre during that time, many reporters chose to accompany frontline workers. There were reporters who did not tell their families about their work, those who had to leave wife and children to go to ‘hot spots’ to work, or those who could not see their family members for the last time. All of them dedicated themselves to giving real information and images about the fight against the pandemic.

Although they did treat patients or provide medical aid, they played just as big a part in the fight against COVID, making huge personal sacrifices to record the history of an unforgettable period. — VNS