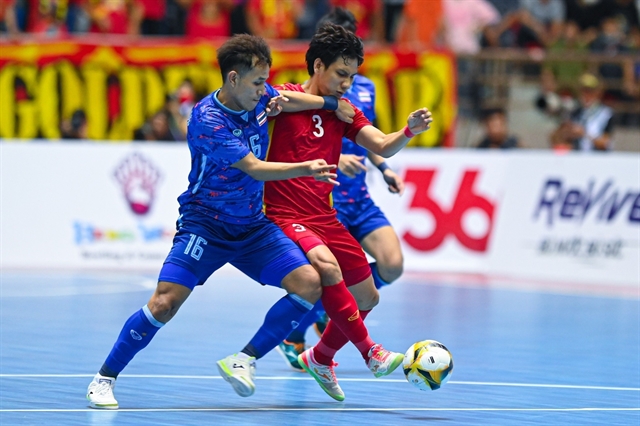 HÀ NAM — A day after Thailand triumphed in the women’s futsal, their men completed a golden double after cruising past Việt Nam 2-0 in the final at the Hà Nam Gymnasium on May 20.

With the win against the hosts, Thailand won their fifth consecutive SEA Games, while Phạm Minh Giang’s men will have to wait for another Games to fulfil their golden dream.

Việt Nam entered the match cautiously, knowing a draw would be enough for them to win the title due to a better goal difference.

In such an important game, giving space to the opposition is not something any team can afford, and Thailand capitalised on sloppiness from Việt Nam.

The match started as the Thais outplayed Việt Nam in almost every one-on-one situation, breaking the hosts’ attacks with their aggressive pressing.

After just two minutes, from a smooth build-up in the right the ball was fed to Muhammad Osamanmusa, whose brilliant turn and shot into the far post defeated both defender Nhan Gia Hưng and goalkeeper Hồ Văn Ý.

Having conceded so soon, Phạm Minh Giang’s tactics were ruined as Thailand dropped back to defend, waiting for deadly counter-attacks, one of which was converted after just over nine minutes.

With so much time and space, Thailand’s number 16 sealed the first half with a light but deadly low shot.

Bamboozled by the two goals, Việt Nam played the second half with nothing to lose as the Golden Star Warriors threw everything at the opponent, switching to the power play in the last minutes to find a goal.

But without accuracy and luck, and against stunning saves from Thailand’s goalie, the men in red received nothing other than some exceptional home support.

The match ended 2-0 as Thailand once again defended their SEA Games title to show complete dominance in the region’s biggest sports competition.

The 4-4 draw between Myanmar and Malaysia saw an entertaining display between the two teams no longer in the medal chase.

The first half was dominated by Myanmar, with four goals in quick succession.

Just when everyone thought the ASEAN Lions would register an easy win to end the tournament with their heads held high, Malaysia rose in the second half, mimicking their opponent’s performance in the first half to equalise the score.

Thailand topped the table with 10 points, followed by Indonesia with 8.

The men’s futsal event was held in a round-robin format with five teams competing for medals: Việt Nam, Malaysia, Myanmar, Indonesia and Thailand.

All matches took place at the Hà Nam Gymnasium. — VNS