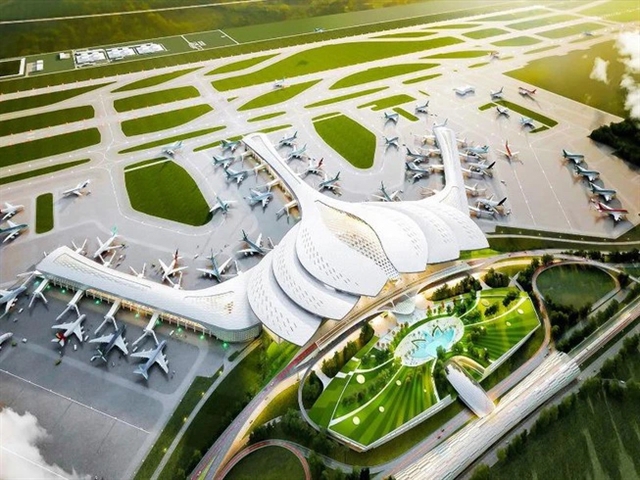 A rendering of the proposed Long Thành International Airport in the southern province of Đồng Nai. Photo courtesy of Airports Corporation of Việt Nam

HCM CITY — The Airports Corporation of Việt Nam (ACV) has urged Đồng Nai Province to hand over within this month the remaining land needed for the first phase of the much-awaited Long Thành international airport.

Of the 2,500ha required for the first phase, Đồng Nai authorities have handed over only less than 1,500ha.

Work began on the US$4.6 billion first phase early last year, and progress could be held up unless the land is handed over now, according to the ACV, which will oversee the construction and operate the airport when completed in 2025.

The Government has tasked the Đồng Nai People’s Committee with handing over 5,000ha in all after paying compensation and resettling people who have to move out to make way for the project.

But it is happening too slowly, according to the Ministry of Transport.

Authorities in Long Thành District, where the airport will be built, blamed the tardiness on problems related to land documents and the COVID-19 pandemic.

Lại Xuân Thanh, chairman of ACV, said the company was working with its consultants to speed up progress so that the first phase would be ready for operation no later than September 2025.

The airport is planned to be built in three phases over three decades.

In the first, one runway with a length of 4,000m, taxiways, an apron, and a passenger terminal with other auxiliary works will be built to handle 25 million passengers and 1.2 million tonnes of cargo a year.

The airport will cost VNĐ336.63 trillion ($14.5 billion) and have four runways, four terminals and other auxiliary facilities to handle 100 million passengers and five million tonnes of cargo a year by 2040.

Located 40km to the east of HCM City, the airport will take over from HCM City’s Tân Sơn Nhất as the country’s largest. — VnExpress News