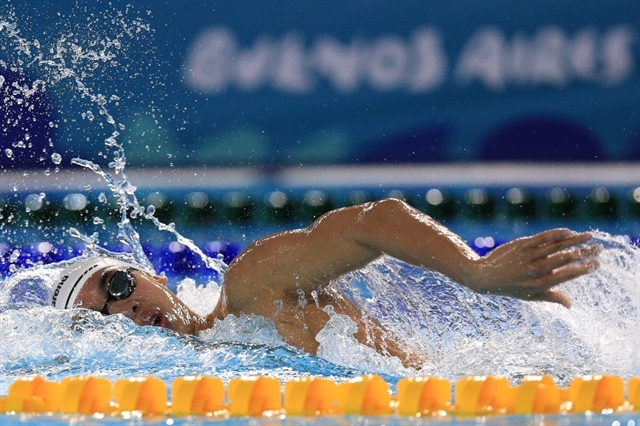 Nguyễn Huy Hoàng practises hard even during the Lunar New Year holiday to prepare for important tournaments in 2022. AFP/VNA Photo

Swimmer Nguyễn Huy Hoàng kept training over the Lunar New Year holiday to ensure he is in peak condition for the coming Southeast Asian (SEA) Games in Hà Nội in May, and to maintain the best chance for a first gold medal at the Asian Games in Hangzhou, China.

The SEA Games and Asian Games are the two biggest tournaments for Vietnamese athletes this year. To hit their best form, all teams were asked to stay at the national training centre and keep practising even during the Lunar New Year holiday, the most important celebration in Việt Nam.

For the first time in his life, Hoàng, the most promising swimmer in Việt Nam, could not join his family. But he understands such a ‘sacrifice’ is worth it to ensure a bright future and national pride.

“I did not return home for the holiday but stayed at the Cần Thơ national training centre to practise as the SEA Games is approaching,” said Hoàng, who was voted the best Việt Nam athlete of 2021.

“It is my first time celebrating the Lunar New Year holiday far from home. Not only for me but for many other athletes. I need to sacrifice personal wishes for my sport career. When you enjoy one week or 10 holidays your body will slow down while it needs to be sped up.

“The SEA Games are very close and I can’t rest. I have to work so that my endurance and stamina are at a good level.”

In a year strongly affected by the COVID-19 outbreak, Hoàng suffered from limited time to practise and almost no chance of taking part in international training camps and competitions. 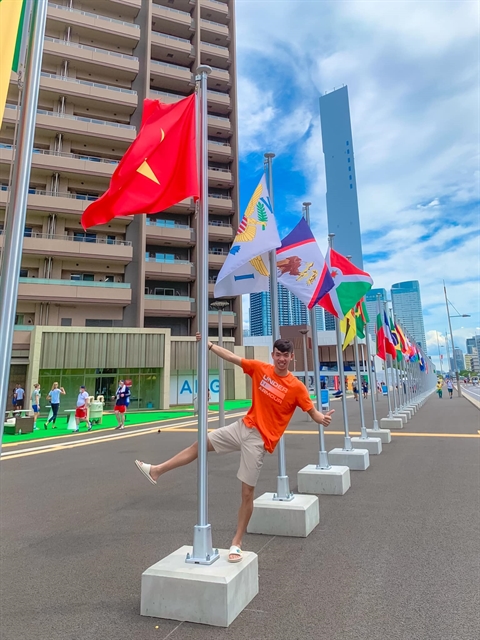 Hoàng poses for a photo during his time at the Tokyo Olympics in July 2021. Photo courtesy of Nguyễn Huy Hoàng

Hoàng was the only Vietnamese swimmer to officially qualify for the 2020 Tokyo Olympics. Although he did not make any final, he was the best Asian competitor in the men’s 800m and 1,500m freestyle events.

Later on, he set new national records in the 400m and 1,500m freestyle at the World Swimming Championships in the UAE in December.

“I could not beat my personal best at Tokyo but I did not disappoint because the results were acceptable as I practised domestically, with no intensive training and no competition test,” said Hoàng.

“After the Olympics, I was sent to Hungary to sharpen up and improved my scores at the world event. I am happy with these achievements.”

Born in 2000 in Quảng Bình Province, Hoàng has become one of the best Vietnamese swimmers in history.

He proved his talent at the Malaysian 2017 SEA Games, unexpectedly winning a gold medal in the 1,500m and setting a national record. 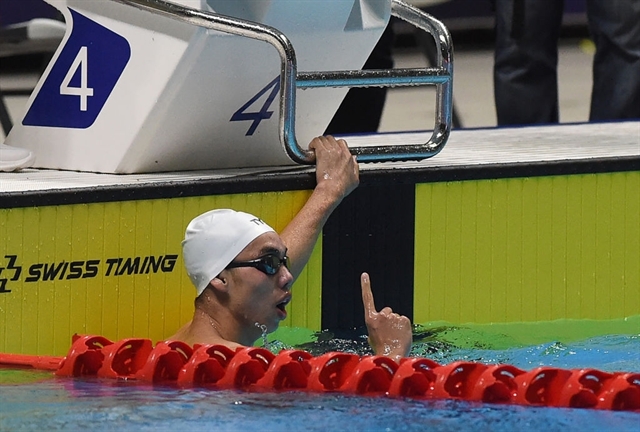 Hoàng reacts after winning the men’s 1,500m freestyle swimming event of the 2019 SEA Games in the Philippines. AFP/VNA Photo

At the 2018 Asian Games (ASIAD) in Indonesia, he grabbed bronze in the 800m freestyle and silver in the 1,500m freestyle. The silver was Việt Nam’s best result at the Games.

He continued shining at the 2018 Youth Olympics in Argentina with a gold in the 800m freestyle, clocking in at 7min 50.20sec, which is still his personal best and a national record.

At the last SEA Games in the Philippines, Hoàng won and set a new Games and national record in the 1,500m freestyle, with a time of 14min 58.14sec, after winning a gold in the 400m freestyle and a silver in the 4x200m freestyle relay.

2020 and 2021 fell under the shadow of the pandemic as most sports tournaments were cancelled or postponed. Nevertheless, Hoàng was pleased with the Best Athlete of 2021 title he received in early January.

“I am happy because despite the pandemic my achievements still impressed. It was a gift for me in the new year. It will push me up and help me gain confidence for the coming tournaments including the SEA Games and the ASIAD this year,” he said.

At the SEA Games in mid-May in Hà Nội, Hoàng will compete in the 200m, 400m, 800m and 1500m freestyle. He will defend his titles in the latter three and compete for the first time in the first.

However, winning at the ASIAD is a different matter.

“I have to keep my results under 14min 50sec in the 1,500m, and 7min 47sec in the 800m to have a chance to win gold,” said Hoàng, who has a strong chance as his main rival Sun Yang of China, the defending champion, will not compete in the September Games. 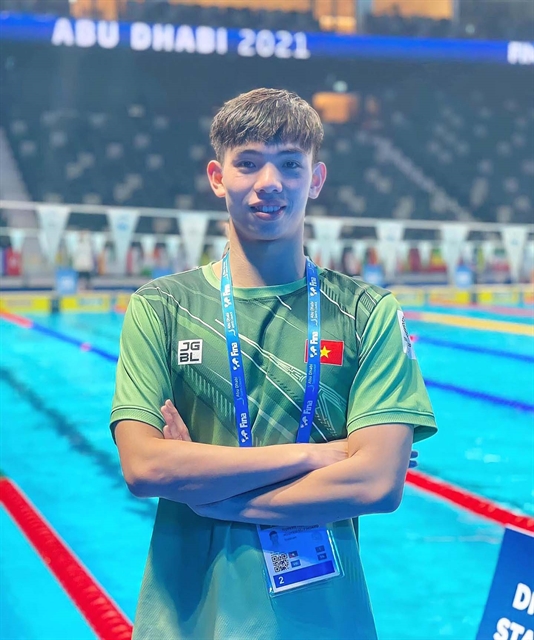 Hoàng set two national records in the world championship in December 2021 in the UAE. Photo courtesy of Nguyễn Huy Hoàng

The national record of 14min 41sec at the UAE World Championship was a positive signal for Hoàng who will fly to Hungary with his teammates next week for a two-month training course in preparation for the two Games.

“In the previous course in Hungary, qualified experts worked on my new technique and helped to improve our strength and stamina. We also took part in a range of tournaments. The training conditions were pretty good. In return, I feel assured to have better results for the SEA Games and ASIAD,” he said.

“2022 will be a decisive year for my career. I will have to work harder and harder to have better results.” VnExpress News