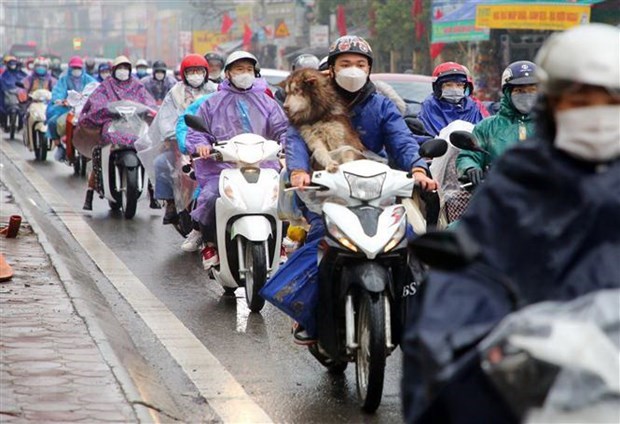 People in raincoat and warm clothes move on a street in winter. — VNA/VnExpress News Photo

HÀ NỘI — A cold spell is approaching Việt Nam keeping the region chilly over the next few days.

After landing in some northern mountainous areas on early February 13, the spell will spread to other places in the north and then some areas of the central region, said the National Centre for Hydro-Meteorological Forecasting.

On February 13, the northern region experienced the lowest temperatures of 11 – 14 degrees Celsius, even 8 – 11 degrees or lower in mountainous areas where rains with snow may appear.

In the central region, temperatures will drop to 14 – 17 degrees in the areas from Thanh Hóa to Thừa Thiên-Huế provinces.

Due to impact of the cold spell and high-altitude wind convergence, the centre predicted downpours of 30 – 50mm, even over 70mm, across the northern region. The provinces from Thanh Hóa to Thừa Thiên-Huế are likely to record heavy showers, lightning, and hail. — VnExpress News