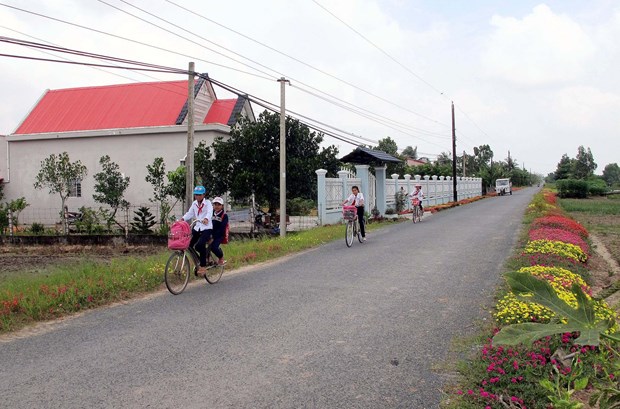 SÓC TRĂNG — The lives of ethnic Khmer people in Sóc Trăng Province have improved significantly with the recognition of many of their communes as new – style rural areas.

In Mỹ Xuyên District’s Tham Đôn Commune, the ethnic group makes up 73 per cent of the population and the commune has been recognised as an advanced new – style rural area under a national programme.

It has standard roads, electricity, water, healthcare, and other infrastructure. The lives of people here have improved due to the adoption of effective production models, especially in agriculture.

Sơn Hang of the commune’s Trà Bết Hamlet has raised dairy cows for more than 10 years but began to improve his income in 2015 after participating in the province’s dairy cow breeding programme.

The programme taught him techniques for raising cows and calves and provided other support. His animals are doing well and he earns VNĐ5-6 million (US$220-265) a week from milk.

“The money is not insignificant in this rural area,” he said.

Tăng Trung Bảo, secretary of the commune Party Committee and chairman of its People’s Committee, said: “Thanks to the programme [for building new – style rural areas], the lives of local people have improved significantly.”

The commune hopes to become a model new – style rural area by 2025, he said.

Viên Bình Commune in Trần Đề District was recognised as an advanced new – style rural area just before Tết (the Lunar New Year), which was on February 1.

Kim Suôl of Viên Bình Commune’s Lao Viên Hamlet said the commune faced many difficulties in the past, but now its education levels have risen and economic activities have become more efficient.

“Houses here are well built. Roads are wide and beautiful and reach every corner of the commune.”

Local authorities have spent more than VNĐ92.5 billion ($4 million) since 2018 to develop the commune into an advanced new – style rural area.

All roads in the commune are asphalted.

The province has focused on developing infrastructure, improving education, training and healthcare, and preserving the culture and traditions of the Khmer.

It has also rolled out preferential policies for the Khmer, like providing soft loans and training in farming techniques.

The province has prioritised investment in infrastructure and socio-economic development in ethnic areas, he added.

The poverty rate among the Khmer is 2.88 per cent.  VnExpress News