Shopkeepers at traditional markets forced to cut staff, even close down 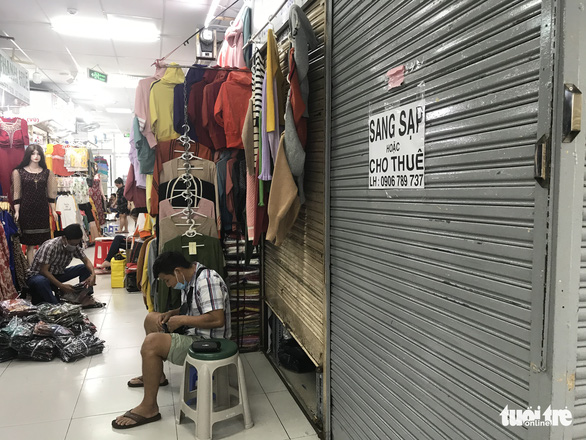 HCM CITY — Trần Kim Thu, who owns a clothes stall in Bến Thành Market in HCM City, says: “The maximum sales per day now are only around VNĐ2 million (US$87). It must be at least VNĐ6 million ($262) to break even.”

Now only around 500 stalls are still open, or a sixth of the normal number.

Most smaller traders have closed to reduce costs or are trying to sell their shop, Thu said.

One of the city’s oldest markets has just a few dozen visitors during weekends compared to thousands before the COVID-19 pandemic.

Most of its 3,000 stalls, which used to sell garments, footwear, and handcrafts, are closed.

According to the management, most stalls except those selling fresh produce have few customers, especially handbags, clothing and handicrafts shops.

Shops selling Vietnamese handicrafts and fried seafood, favoured by both foreign and local visitors, have been closed since March 2020.

“The impact of the pandemic on my business began last February,” Nguyễn Thị Thơm, who sells handicrafts, said.

Many other markets in the city including An Đông in District 5, Bình Tây in District 6 and Soái Kình Lâm in Chợ Lớn (Big Market) in District 5 face similar woes.

Most stalls at these places used to hire at least three salespeople, but no longer, and many have even had to shut down due to lack of business.

Though usually not thought to be tech-savvy, they have been focusing on online sales and networking to survive amid the pandemic, and many are even thriving.

Trần Kim Huệ, who sells clothes at An Đông Market, said for the past two months her daughter has been showing her how to use Facebook and Zalo to sell her products.

Trịnh Thái Nhung, another clothes seller in the same market, said after taking part in an online Chợ Lớn Market fair last September, she has been able to network with many businesses, including Co.opmart, which has greatly benefited her business and employees.

She has asked An Đông Market too to organise online market fairs.

Foodstuff, fruit and vegetable traders at Bến Thành Market are selling their products via Grab.

Dương Thị Thanh Thủy, a confectionery seller, said while her family business had been relying on customers and tourists over the last 60 years, she now has to make use of technology.

Some traders said selling online has not been profitable so far since it is still new to them but could be more profitable in the long run.

Bến Thành Market is working with the District 1 Information Technology Centre to improve its website to help its tenants sell online.

Trần Huy Cường, director of the District 5 Centre for Economic Development and Labour Supply Assistance, said the district has organised online fairs to help traders get used to online channels.

They are also being taught how to use social media to sell their goods, take photos and write about their products, he added.

According to the city Department of Industry and Trade, online shopping has gradually become popular after the long period of restrictions due to the pandemic, relentless rise in fuel prices and decreasing incomes, which has caused people to cut spending.

It plans to support small businesses by continuing to reduce taxes and extend the payment deadline.