Shares finish higher on the gains of blue-chips 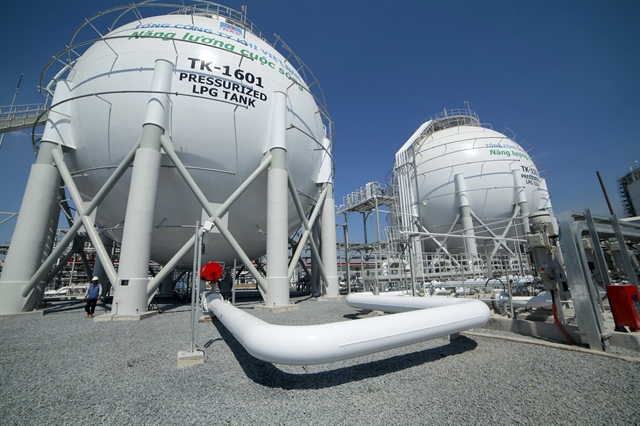 PetroVietnam Gas’ tanks. The company posted a gain of 1.3 per cent on Thursday. Photo pvgas.com.vn

HÀ NỘI — Shares ended higher on Thursday after facing strong correction in the previous session thanks to the gains of large-cap stocks.

Liquidity was slightly higher than the previous session with about 531 million stocks traded on the southern bourse, equivalent to VNĐ15.4 trillion (US$670.8 million).

Market breadth was negative with 272 losers and 160 gainers.

The uptrend was due to gains in many large-cap stocks, especially in banking and energy sectors.

In the basket, 22 stocks climbed, one stayed flat and seven slid.

On a sector basis, ten out of 25 sector indices on the stock market gained ground, including insurance, real estate, retail, oil and gas, banking and food and beverage.

On the other side, losers included securities, wholesale, construction, seafood processing, healthcare, rubber production, agriculture, IT and logistics.

The northern market index had declined 1.33 per cent, to end Wednesday at 360.97 points.

More than 68.2 million shares were traded on the northern exchange, worth VNĐ1.56 trillion. — – VnExpress News