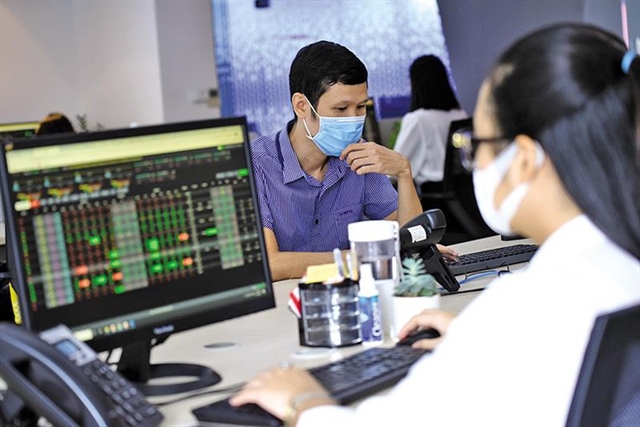 Investors watch stock indices. Securities companies forecast that the stock market is still a channel to attract investors, but organisations and individuals have to focus more on recovering and promoting production after the pandemic. Photo tinnhanhchungkhoan.vn

Achieving pre-tax profit of VNĐ534 billion (US$23.3 million) last year, Việt Dragon Securities Co (VDS) sets a pre-tax profit target of VNĐ504 billion this year, down 5.5 per cent. This plan is based on the forecast that VN-Index this year fluctuates around 1,340-1,750 points and the average liquidity is VNĐ25 trillion to VNĐ30 trillion per session.

Some other securities companies have set more optimistic targets.

After restructuring and witnessing strong growth, Tiên Phong Securities (TPS) sets a revenue target of VNĐ1.98 trillion, profit before tax of VNĐ500 billion, up 46 per cent and 85 per cent, respectively compared to 2021.

Securities companies forecast that the stock market is still an investment channel to attract investors, but organisations and individuals have to focus more on recovering and promoting production after the pandemic.

According to Việt Capital Securities (VCI), the VN-Index will reach 1,550 points by the end of 2022.

Nguyễn Miên Tuấn, Chairman of the Board of Directors of Việt Dragon Securities (VDS), said that inflation exploded around the world and spread to Việt Nam, thereby affecting the stock market. Not to mention, the stock price level is at a high level, which is not favourable for the proprietary trading of securities companies.

According to Tuấn, in the current conditions, the proposed plan is positive. “We will try our best to fulfil the plan,” Tuấn said.

Trần Sơn Hải, General Director of Tiên Phong Securities Co., the full-year profit plan seems to be modest compared to the results of the first quarter of VNĐ300 billion.

“After June, when the company has finished raising capital, it can adjust the profit plan accordingly,” Hải said.

“In addition to revenue from consulting services for bond issuance, Tiên Phong Securities will promote segments such as stock brokerage, warrant offering, derivatives trading as well as proprietary trading,” he said.

Many securities companies have planned to raise capital. In previous years, a securities company would be unlikely to have a capital of VNĐ1 trillion, now there are companies with the capital size of a mid-sized bank, such as SSI Securities at VNĐ15 trillion and VNDirect Securities with VNĐ12 trillion.

It is not possible to take the performance results of a year with many favourable conditions to set a step-by-step plan for the following years.

As for AAS, it is expected that the entire amount of money raised will be allocated to the company’s activities, including investing in valuable papers in the market, margin trading and securities underwriting and issuance activities.

Securities companies are actively adding financial capacity, because, in addition to increasing the ability to provide margin, it also opens up business opportunities in other areas, with many other products. VnExpress News