Although many veteran athletes are absent from this year’s SEA Games, Vietnam still have a strong roster of excellent individuals.

Nguyen Thi Oanh is the current forerunner of Vietnamese athletics. In SEA Games 2017, she clinched the double gold medal in the 800-meter and 1,500-meter distances and helped Vietnam dominate these categories ever since. In SEA Games 2019, she successfully defended her gold medals in these two events, and scored another in the 3,000-meter hurdle race. Overall, Oanh has won seven gold medals for Vietnam over three SEA Games.

Nguyen Thi Huyen is another prominent name in athletics. In the most recent three SEA Games events, she won six individual and two team gold medals. Her favorite category is the 400-meter hurdles, in which she claimed gold in 2015, 2017 and 2019.

With the same number of golds as Huyen, Dinh Phuong Thanh is the most decorated gymnast in Vietnam, with four golds in SEA Games 2015, two in 2017 and two in 2019. Behind Thanh is Le Thanh Tung, who also has five gold medals in his collection. At SEA Games 31, both these two gymnasts will face tough competition from Philippines world champion Carlos Yulo.

Compared to Vietnam’s top chess player Le Quang Liem, Nguyen Ngoc Truong Son might not have as much international accolades. But he’s still the most prolific chess player of Vietnam in SEA Games. Since his first SEA Games event in 2005, Son has won six gold medals. In SEA Games 31, Son participates in standard and rapid chess events.

The other two athletes have won five SEA Games gold medals each as fencers. Nguyen Tien Nhat claimed double gold in SEA Games 2015. Two years later, he successfully defended his medal in the individual event. In 2019, Nhat scored another double just like he did four years earlier.

Vu Thanh An also won gold in the same categories as Nhat, but by using a sabre opposed to Nhat’s epee. Both An and Nhat are expected to defend their double golds in SEA Games 31. 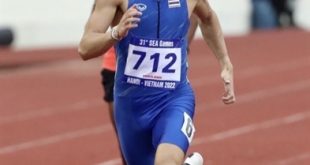