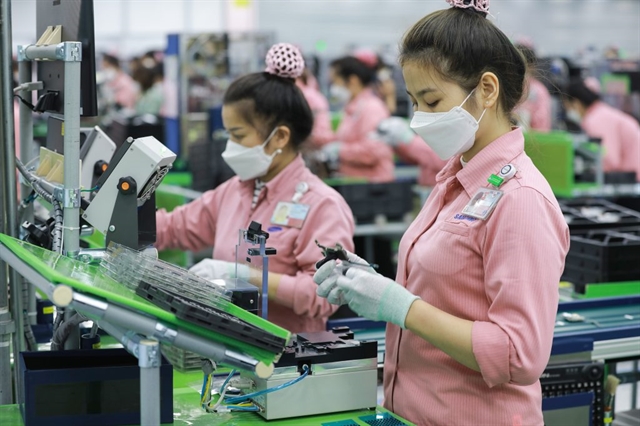 A mobile phone assembly line at Samsung Việt Nam’s factory. The company’s export value hit $65.5 billion, up 16 per cent on year. — Photo courtesy of the firm

HÀ NỘI — Despite difficulties due to COVID-19, Samsung Việt Nam earned US$74.2 billion in revenue last year, up 14 per cent annually.

The company’s export value, meanwhile, hit $65.5 billion, up 16 per cent on year, according to its 2021 business report.

Samsung Việt Nam attributed the outcomes to its plants’ serious implementation of pandemic prevention and control measures in line with regulations of the Vietnamese Government, particularly after the fourth wave of outbreaks began in late April last year.

The company said it received comprehensive support from the Government and the authorities in localities where its factories are located, thus avoiding interruptions to their operation.

Also in 2021, over four million Samsung foldable phones were sold worldwide, four times that the volume recorded in 2020. Currently, more than 50 per cent of Samsung phone products are produced in Việt Nam. Smartphones manufactured at Samsung factories in the nation are exported to 128 countries and territories around the world.

Director General of Samsung Việt Nam Choi Joo-ho said in response to the assistance of the Vietnamese Government, his firm will not change its business strategy for the country.

At a reception for Director General of Samsung Việt Nam Choi Joo-ho in Hà Nội, the PM said Samsung’s investment is evidence of the fruitful development of the strategic cooperative partnership between Việt Nam and the Republic of Korea (RoK).

He lauded the group’s performance amid the COVID-19 pandemic, with its cumulative turnover increasing 14 per cent in 2021 as compared with the previous year to hit over $74 billion.

PM Chính appreciated Samsung’s consideration of Việt Nam as a destination for long-term investment, noting its projects are among the FDI projects being rolled out quickly in the Southeast Asian nation.

Samsung’s research and development centre, the biggest of its kind in Southeast Asia under construction in Hà Nội, is expected to support Vietnamese firms and raise locally-made content, he said.

The Government views Samsung as an investment model in Việt Nam, and stands ready to help the group seek the best suitable destination for its high-tech battery project, he said.

The PM called on Samsung to continue helping Vietnamese firms participate in its global value chain as well as research and development activities in Việt Nam.

The leader expressed his hope that Samsung will work to attract investment to Việt Nam, and suggested the group set out a personnel training strategy to include Vietnamese people in its leadership.

For his part, Choi praised Việt Nam’s achievements in the COVID-19 combat and socio-economic development in 2021, with export-import revenue growing by 23 per cent.

Samsung earned $65.5 billion from exports last year, up 15.8 per cent from the previous year, he said, attributing the results to the Vietnamese Government’s support policies.

Regarding the research and development centre, he said it is expected it to be put into operation this year.

Both sides noted their belief that the co-operation will grow further in 2022 and the years to come. — VnExpress News