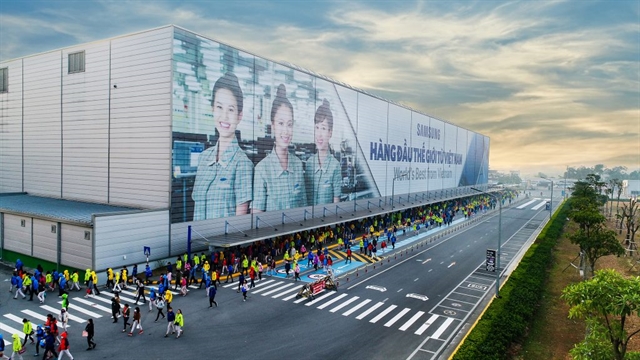 HÀ NỘI — A subsidiary of electronic giants Samsung has been given the greenlight to further invest US$920 million in an electro-mechanic plant in northern Việt Nam.

The plant was given the go-ahead in 2013 with an initial registered outlay of $1.2 billion. It came into operation in February 2015, manufacturing HDI printed circuit boards, telecommunication components, high-tech mobile equipment and other electronics.

SEMV made the request for investment adjustment in late December 2021 to expand its plant’s production and was approved, lifting the plant’s total capital to around $2.27 billion.

Choi Joo Ho, general director of Samsung Việt Nam, noted that such a huge investment indicates the corporation’s long-term commitment to the country.

He said that Việt Nam is an attractive investment destination with a stable political and social system, high-quality human resources and good infrastructures.

“Samsung has complete confidence in Việt Nam’s investment environment and would never change its business strategy in the country,” added the general director.

The director also revealed that Samsung was going to allocate $220 million for a Centre of Research and Development in Hà Nội in order to transform Việt Nam into a strategic R&D hub.

The centre is expected to be launched in late 2022 and its research focus will be on global tech trends including Artificial Intelligence, Big Data and Internet of Things.

The additional investment has pushed the figure up to $19.2 billion, allowing Samsung to maintain its position as the largest foreign investor in Việt Nam. — VnExpress News

Previous Assistant Kim Chi, a silent hero in the journey to World Cup
Next Agricultural exports expected to surge this year