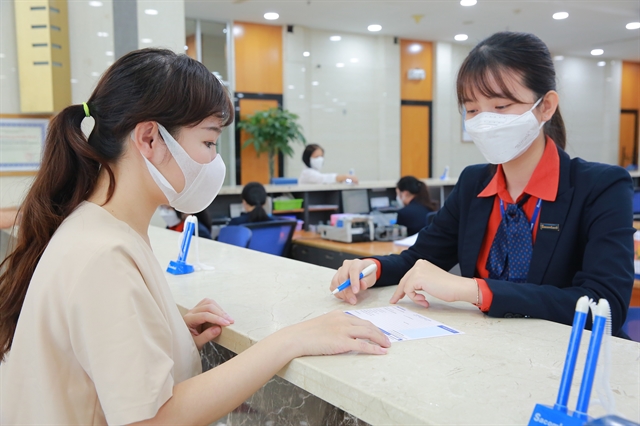 At a Sacombank transaction office in HCM City. Sacombank 2021 profits exceed target by 10 per cent. — Photo courtesy of the bank

HCM CITY — Despite facing difficulties caused by the COVID-19 pandemic, Sacombank’s pre-tax profits were worth VNĐ12.66 trillion (US$554.16 million) last year, though after risk provisioning for loans and restructuring expenses, the actual number was VNĐ4.4 trillion ($193.1 million).

But even this was 10 per cent higher than the target approved by shareholders.

Total consolidated assets increased by 6 per cent to VNĐ521.12 trillion ($22.85 billion), with profitable assets increasing by 8.9 per cent.

It had total deposits of over VNĐ464.52 trillion and loans outstanding of over VNĐ388.22 trillion, a year-on-year increase of 14 per cent that is in line with the credit quota assigned by the State Bank of Vietnam.

The bank collected nearly VNĐ14.1 trillion ($616.52 million) worth of bad and outstanding debts last year, of which nearly VNĐ11.8 trillion was under the restructuring project.

By selling mortgaged assets and receiving loan repayments on schedule, the bank got back more than VNĐ22.1 trillion worth of debts, far higher than the VNĐ10 trillion target set at the beginning of the year.

As a result, outstanding assets went down by nearly 20 per cent from the previous year and the consolidated non-performing loans ratio declined to 1.47 per cent.

Sacombank achieved positive results in most areas, with net services revenues topping VNĐ4.3 trillion, a year-on-year increase of 16 per cent, mainly driven by the insurance, card and e-banking segments.

Operating expenses were closely controlled, creating conditions for setting up risk provisions and allocating accrued interest under the restructuring project.

Sacombank’s safety performance indicators met the State Bank of Việt Nam’s norms and improved, especially the capital adequacy ratio, which has always remained above 9 per cent as against the minimum requirement of 8 per cent stipulated by the central bank, ensuring a balance between safety and efficient use of capital resources.

The number of Sacombank’s regular customers reached nearly 10 million by the end of last year.

After nearly five years of focusing on restructuring, Sacombank has completely resolved most of its problems, exceeded key targets and is making breakthroughs to complete the project ahead of schedule. They include recovering nearly VNĐ72 trillion ($3.15 billion) worth of bad and doubtful debts.

This year, Sacombank will continue to accelerate its restructuring, implement solutions to handle bad debts, promote the development of digital technology in all key areas, continue to complete risk management projects in line with Basel II standards, improve customer experience and satisfaction and labour productivity, and focus all resources to create a breakthrough in its business. — VnExpress News