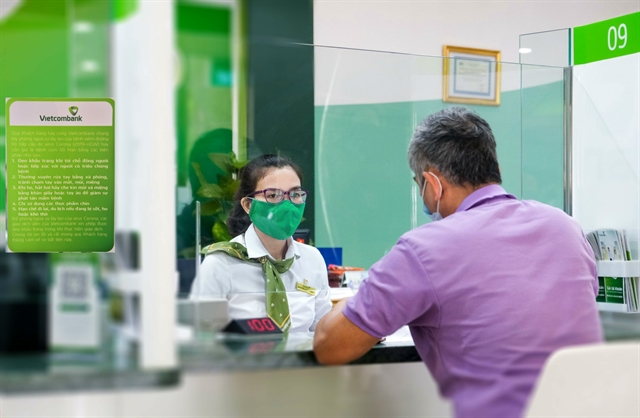 A banker talking to a customer at Vietcombank’s transaction office. The bank share was the only large-cap stocks posting positive performance yesterday, up 3.36 per cent. Photo courtesy of Vietcombank

HÀ NỘI — The market finished lower during Monday’s trade, weighed by profit-taking activities across all sectors.

The index extended losses in the afternoon session due to rising selling force. It fell 3.44 points in the morning trade.

The market’s breadth was negative with 446 stocks decreasing, while only 49 stocks rose.

Meanwhile, liquidity on two main exchanges surged compared to the last trading session with a trading value of VNĐ34.59 trillion (US$1.52 billion). Of which, the trading value on HoSE climbed 39 per cent to nearly VNĐ29.2 trillion.

The index’s downtrend was driven by the losses of stocks across all sectors, with many large-cap stocks hitting the maximum daily loss of 7 per cent.

Vinhomes (VHM) led the market’s trend yesterday, down 3.77 per cent in capitalisation. It was followed by Việt Nam Rubber Group (GVR), VPBank (VPB), Vingroup (VIC) and Hòa Phát Group (HPG), which posted losses of at least 3.35 per cent. GVR even hit the biggest intraday loss of 7 per cent.

On the contrary, strong gains of Vietcombank (VCB) was the only bright spot of the market on Monday. The bank stock was up 3.36 per cent.

During the session, investors poured over VNĐ4 trillion into the northern market, equivalent to a trading volume of 137.1 million shares.