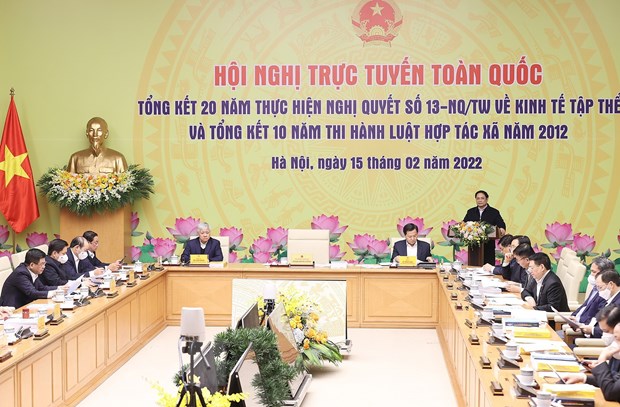 These achievements have raised the position and stature of Việt Nam, resulting in continuous economic growth.

The conference, held on Tuesday, aimed to assess 20 years’ of Resolution No. 13-NQ/TW on the collective economy, as well as 10 years’ implementing the Law on Cooperatives.

Speaking to attendees, Minister of Planning and Investment Nguyễn Chí Dũng said small household businesses would struggle to survive amid the Fourth Industrial Revolution as they have low competitiveness. Dũng who is also Deputy Head of the National Steering Committee for the Development of the Collective Economy and Cooperatives, said the Party, State and the Government of Việt Nam issued guidelines and policies to promote collective economic development and cooperatives.

“Cooperation is inevitable for mutual development,” he said.

Over the past 20 years, along with the process of economic renewal and international economic integration, the collective economic sector underwent different stages of development with advantages and challenges, Dũng said.

The transformation and reorganisation of businesses in accordance with the Law on Cooperatives has been completed.

Newly-established cooperatives are mainly in the fields of agriculture, industry-handicrafts, commerce and services. They are concentrated in big cities, the Southern and North Central provinces and some Northern midland and mountainous province and the Central Highlands.

As of December 31, 2021, the whole country had 27,342 cooperatives, 2.5 times higher than in 2001. The cooperatives have nearly six million members and create jobs for about one million workers.

The average annual income of regular workers in cooperatives has increased, from VNĐ44.6 million in 2017 to VNĐ52.8 million in 2019, equaling 44.8 per cent and 47.3 per cent of the income of a worker in the private sector, respectively.

However, Dũng said that after 20 years of implementing the Resolution, the collective economic sector made positive changes but it had not yet fully promoted its potential and it had not become a foundation of the economy.

For example, a number of objectives and tasks set by the Resolution had not been achieved or fully implemented. Specifically, the growth rate of the collective economic sector was still low and its contribution to GDP had decreased, failing to achieve the target set.

Moreover, theoretical research on cooperatives was not systematic. Việt Nam had few organisations that conduct in-depth studies or offer training on co-operatives as well as the effectiveness and contribution of the collective economy in the economy.

After 20 years of implementing the Resolution, the organisation of the state management apparatus of the collective economy has not met requirements.

Additionally, the legal framework and policies on co-operatives still have shortcomings that hinder development. For example, regulations and policies are not in line with the development of various types of collective economies. The country has not determined a management mechanism that could help ensure transparency and equality.

“The deepening participation in globalisation and international integration with commitments to open markets for trade in goods, services and investment under bilateral and multilateral free trade agreements together with the Fourth Industrial Revolution has created opportunities and challenges for the collective economic sector and cooperatives,” Prime Minister Chính said at the conference.

He emphasised that there were opportunities for the collective economy and cooperatives to thrive, especially those in agriculture.

“A large and experienced workforce, together with infrastructure, especially in rural areas, will be the foundation for promoting the application of advanced and modern technologies and production methods,” he said.

“We have a domestic market with nearly 100 million people, the international market continues to expand after 17 free trade agreements were signed and negotiated. Moreover, we have many appropriate mechanisms and policies to attract investment, encourage innovative thinking, update new knowledge, boldly apply science and technology to improve productivity, quality, and efficiency and be deeply involved in the value chain,” Chính said.

The PM said that it was necessary to study and complete a legal framework to identify the nature of cooperatives and types of collective economic organisations.

“The autonomy and self-responsibility of each cooperative must be promoted. Transparency and efficiency in management and administration of cooperatives must be improved to create motivation for the cooperative sector to develop,” he said, asking for further attention to be paid to accounting and auditing issues and digital transformation to properly adapt to the Fourth Industrial Revolution and climate change. — VnExpress News