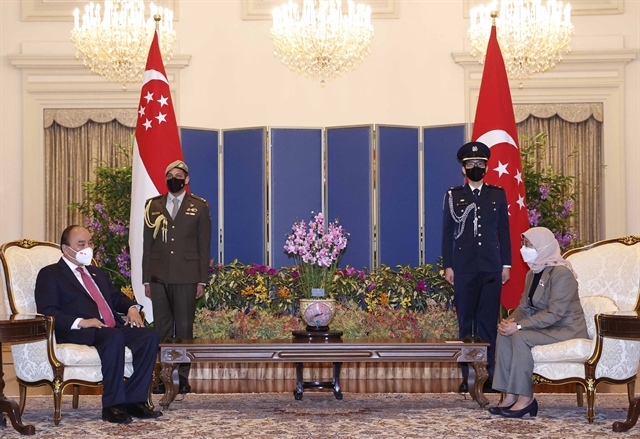 She expressed her belief that the visit would achieve great success, bringing the two countries’ strategic partnership to a new height.

The two leaders expressed satisfaction with the rapid and strong developments in the two countries’ bilateral relationship, especially since the establishment of the strategic partnership in 2013.

Bilateral economic cooperation is becoming one of the bright spots in the region. Singapore continues to be the fourth-largest trading partner and the largest investor in Việt Nam in ASEAN, and has just become the second-largest investor out of 140 countries and territories investing in Việt Nam with a total registered capital of US$66 billion.

The two sides have actively shared experience and supported each other in medical equipment and supplies during the COVID-19 pandemic.

The two leaders acclaimed the countries’ agreement on mutual recognition of vaccine certificates, creating conditions for travel and trade between the two countries, contributing to the socio-economic recovery and development in the “new normal” situation.

They agreed to strengthen co-operation in education, culture, tourism and at regional and international forums.

Promoting investment attraction, particularly in clean energy and sustainable development, is a priority of Việt Nam in the future.

That was the message from President Nguyễn Xuân Phúc as he met executives of leading Singaporean groups on the same day as part of his ongoing State-level visit to the nation.

Among those hosted by the President were leaders of the energy and urban development group Sembcorp Industries, which has implemented 10 Việt Nam-Singapore industrial park (VSIP) projects worth VNĐ15.4 billion in seven localities in Việt Nam.

Praising the VSIP projects that have attracted investors and generated many jobs, Phúc hoped that Sembcorp will build similar IPs in Quảng Trị and Quảng Nam in central Việt Nam and further invest in its projects in Quảng Ngãi and Nghệ An.

He asked the group to channel more capital into sectors with a high proportion of science-technology and innovation, particularly regarding green and sustainable development. Việt Nam will create the best possible conditions for Sembcorp to reap success in investment, Phúc stressed.

Meeting Loh Chin Hua, CEO of the Keppel Corporation, which delivers solutions for sustainable urbanisation, the Vietnamese President praised the group’s effective investment in Việt Nam, including its cooperation with a number of Vietnamese partners like Sovico. Keppel is now operating more than 20 projects worth over $3 billion in Việt Nam.

He proposed the corporation invest in large-scale and innovative projects in renewable and clean energy, infrastructure, and smart cities.

Agreeing with the proposal, the Singaporean CEO said the group is implementing a number of real estate projects in Việt Nam and is aiming for a model, smart and green city.

The leader also met with Nina Yang, CEO of the Surbana Jurong City Global group, and Lee Chong Min, the Founder and Managing Partner of CMIA Capital Partners Singapore. The two enterprises are making a $1.2 billion investment in a 1,000-ha multifunctional project in Hồ Chí Minh City over the next decade. The project will build a high-tech agro-food-ecological urban area with a scale of 100,000 population.

The President asked the businesses to work with the authorities in Việt Nam and HCM City for support during their implementation of the project.

Emphasising that investment promotion is a priority of Việt Nam in future, the President suggested that the SBF continue to be a bridge to promote Singaporean investment in Việt Nam, contributing to push the bilateral relations to new heights. — VnExpress News