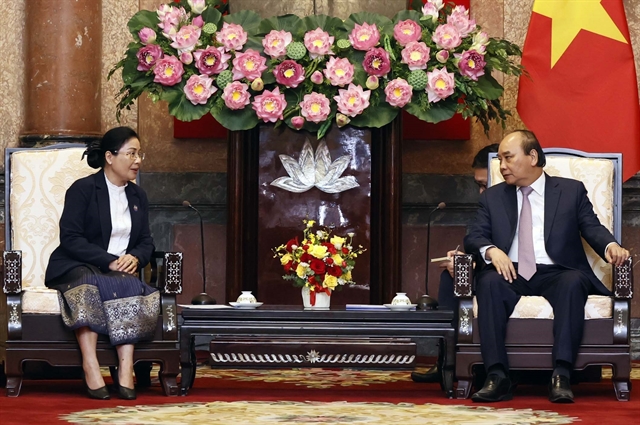 President Phúc affirmed that the Party, State and people of Việt Nam always attach great importance to preserving and developing the special Việt Nam-Laos ties, including the cooperation between the two supreme people’s courts.

Viengthong Siphandone said that the supreme people’s courts of Việt Nam and Laos have enjoyed close collaboration. Along with supporting and sharing the experience with each other in law-building and personnel development, the two sides will continue to strengthen cooperation in improving the professional quality of Lao judges, she said.

Lauding the effective cooperation between the two court systems over the years, President Phúc underlined the significance of judicial reform in national construction and development in each country.

He noted that Việt Nam is building a strategy to build and complete a law-governed socialist State towards 2023 with a vision to 2045, which comprises many contents related to improving the operational efficiency of the court system.

Recently, the Supreme People’s Court has been leading in implementing the judicial reform strategy, while making court procedures more open and transparent, enhancing the capacity of judges and improving the material conditions of courts from the central to local levels, and strengthening international cooperation and integration.

He said that Việt Nam is willing to cooperate and share the experiences with Laos in both theoretical and practical aspects for higher efficiency in court activities in both countries.

The State leader expressed his belief that the partnership between the two court systems will bring about specific benefits and make positive contributions to the development of each country, as well as the growth of bilateral ties. — – VnExpress News