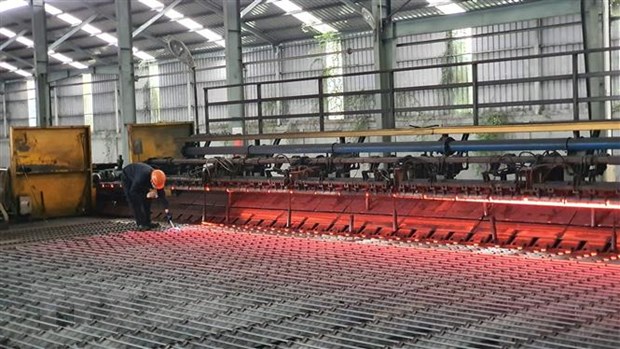 HÀ NỘI — Overreliance on input material imports, small production value and outdated technology were among the major weaknesses of Việt Nam’s steel industry, said a recent report by the Ministry of Industry and Trade.

The report was part of the ministry’s proposed “Strategy for the development of Việt Nam’s steel industry by 2030, with a vision to 2050”, which called for additional governmental policies to support the steel industry.

According to the ministry, Việt Nam’s production capacity for steel billets stood at 27 million tonnes in 2021, of which 7-8 million tonnes was hot-rolled coil. With the exceptions of only a handful of large steel mills such as the Hòa Phát-Dung Quất Iron and Steel Complex, the Hưng Nghiệp Formosa Iron and Steel Complex and Nghi Sơn Steel, the rest of the country’s steel industry was made up of small mills, equipped with outdated machinery and technology.

In addition, the industry lacked the capacity to meet domestic demand, especially for alloy steel which it has not been able to produce. The only long-term solution is to ramp up investment for the construction of large-scale steel complexes to reduce reliance on imports.

The ministry’s conclusion was that the industry’s competitive capacity is limited as its production was marred with energy inefficiency and environmental issues.

“For the most part, the industry is overly dependent on imports of raw materials including ore, scrap and coking coal, resulting in unstable prices,” said the report.

By the ministry’s estimate, Việt Nam needs to import around 18 million tonnes of ore, 6-6.5 tonnes of scrap and 6.5 million tonnes of coking coal this year. As prices for said materials remained high, the steel price is expected to climb, hurting both domestic consumption and exports.

The ministry said the development of Việt Nam’s steel industry remained a key component in the country’s industrialisation effort as a large number of industries including shipbuilding, manufacturing, defence hardware, mining and energy are highly dependent on quality steel.

By 2030, Việt Nam’s total demand for steel was projected to reach over US$310 billion, of which automobiles alone account for $120 billion, industrial construction $120 billion, railways $35 billion and subways $10 billion, among others.

Despite its key role in the country’s socio-economic development effort, the industry has not received adequate support, especially from a policy standpoint, due to a lack of tailored and streamlined policies to support its growth, said minister of industry and trade Nguyễn Hồng Diên.

Diên called for stronger government support for the sustainable and stable development of the industry as well as the country’s metallurgy sector with a focus on increasing production of hot-rolled coil, high-quality steel and the establishment of steel megacomplexes. —- VnExpress News