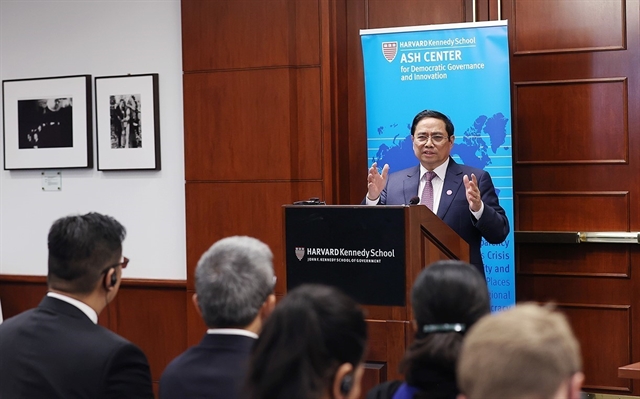 WASHINGTON — Prime Minister Phạm Minh Chính has delivered a presentation on building an independent economy associated with extensive, effective, and substantial international integration in Việt Nam during his visit to the Harvard Kennedy School in Boston on May 14 (US time) as part of his working trip to the US.

The Vietnamese founding father since the very beginning of the modern Việt Nam expressed the desire to set up equal, comprehensive relations with the US in the latter to US President Harry Truman in 1946.

The Việt Nam-US relations have gone through so many vicissitudes and breakthroughs to achieve so much since the two officially normalised ties in 1995. In the 27 years since then, four successive US presidents have visited Việt Nam, PM Chính said.

Trade plays a critical role in bilateral ties. In 2021, ASEAN-US trade hit US$362 billion in value, of which, Việt Nam-US trade alone accounts for one third of the total at $112 billion.

Việt Nam and the US have overcome their differences and arrived at fundamental principles for their relations, as affirmed in the Việt Nam-US Joint Vision Statement issued when General Secretary of the Communist Party of Việt Nam Nguyễn Phú Trọng had an official visit to the US in 2015, which emphasised respect for “each other’s political institutions, independence, sovereignty, and territorial integrity,” PM Chính noted, adding that Việt Nam highly appreciates the US’ support for a strong, independent, and prosperous Việt Nam over the years.

The Vietnamese Government leader affirmed the consistent policy of ‘open doors’, reforms, active and extensive and effective and practical international integration; facilitating and protecting the rightful interests of long-term, effective, sustainable businesses and trade partners in the spirit of ‘harmonised benefits, shared risks’ and observance of the laws.

Việt Nam hopes to be a good friend, a reliable partner, and a responsible member in addressing regional and international issues for the sake of global prosperity.

Thanks to these policies, Việt Nam’s economy has witnessed astounding achievements from its low starting point. In 2021, Việt Nam’s GDP reached $362 billion, compared to the mere $4.2 billion in 1986 when the đổi mới (renewal) process began. The country has become the fourth biggest economy in ASEAN, one in 20 countries with the largest trade volume in the world, the biggest exporter of rice and many other agricultural products, and has 15 active free trade agreements with other countries and regions in the world.

Speaking on the reasons why there is a need for an independent but deeply integrated economy, PM Chính said that recently there had been a lot of complicated unpredictable developments in the world – intensifying strategic competition, financial and monetary risks and disruptions to the supply chains, the negative reactions to globalisation, and other traditional and non-traditional security issues such as climate change, pandemic, ageing population, depletion of natural resources, energy and food security, cybersecurity, human security, etc.

These issues put countries in a place where they need to focus on boosting the self-reliance and independence of their economies to lessen the impacts of external shocks, but this should not mean a total close-off from the world, but go in tandem with an open-door policy and international integration, PM Chính said.

Việt Nam, like other developing countries, wants to advance their economy to overcome the middle-income trap to become a developed nation, according to the Prime Minister.

To succeed, each country will have different suitable methods, roadmaps, and steps with consideration of their own characteristics and conditions, but special attention should be paid to some universal requirements. Accordingly, economic independence and self-reliance are associated with independence and autonomy in terms of politics, foreign policy, and international integration.

The respect for differences in conditions and characteristics of politics, economy, history, culture, and society will contribute to the diversity and richness of the global economy and national advantages, but along with that, there must be respect for the legitimate rights and interests of countries based on the UN Charter and international law.

The PM stated that Việt Nam had both engaged in extensive international integration and made great efforts to improve its internal capacity, flexibly and effectively respond to external shocks such as the 1997-1998 Asian financial crisis, the global financial crisis in 2007-08, and the global COVID-19 pandemic.

In the current context, Việt Nam needed to continue to promote the building of an independent and self-sufficient economy associated with proactive and active international integration due to three main reasons – the first is to resolve Việt Nam’s major challenges; the second is to ensure independence, sovereignty, and national interests; the third is to improve the country’s  capacity and potential for and effective integration into the global economic system, and effective implementation of international commitments.

According to PM Chính, the concept of building an independent and self-reliant economy, associated with proactive and active international integration, has been clearly defined and a consistent goal in Việt Nam’s 2013 Constitution and the Party’s resolutions and national development platforms.

To realise these objectives, the main goals of building an independent and self-reliant economy associated with proactive and active international integration are: building an effective, sustainable economy with reasonable structures; improving resilience and competitiveness; adapting flexibly and effectively to changes in international, regional, and domestic situations; taking full advantage of opportunities from international integration to create a driving force for rapid recovery in the short term and sustainable development in the medium and long term.

At the same time, special attention should be paid to social progress and justice, ensuring social security, and people’s lives, as General Secretary Nguyễn Phú Trọng pointed out: “We must not sacrifice social progress and social equality in the pursuit of economic growth,” the PM remarked.

To realise the objectives, PM Chính mentioned a number of missions and measures that need to be done.

First of all, the maintenance of independence, sovereignty, territorial integrity, socio-political stability, in order to have an environment conducive to the development of the economy as desired.

The second is to perfect the Socialist-oriented market economy institutions in a synchronous, modern and integrated manner, in line with international commitments.

The fourth is to focus on restructuring the economy in association with profound renewal of growth model that will shift the economy towards the direction of science and technology, innovation, resource efficiency, and green growth.

The fifth is to mobilise all social resources, to promote the important role of domestic and foreign enterprises.

The sixth is human resource development and modern national governance. PM Chính mentioned a number of specific annual goals to strive for by 2025 such as ranking in the top 50 countries in terms of Industry 4.0 Competitiveness (WEF); top 40 countries with sustainable development (UN); top 60 countries with e-Government (UN), etc.

Concluding his speech, PM Chính said he highly appreciated the positive results of Fulbright University and the Việt Nam’s Executive Leadership Programme (VELP) that is jointly implemented by Harvard University and Vietnamese Government agencies, expressing the wish to replicate this model with other famous universities of the US and the world.

Doug Elmendorf, Dean of the Harvard Kennedy School, said he looked forward to the PM’s speech on Việt Nam’s development policies and vision as well as the challenges the country faced in the new development era.

After the PM’s presentation, ministers and members of the delegation spoke and participated in a discussion with Harvard University professors on Việt Nam’s development orientations. — – VnExpress News