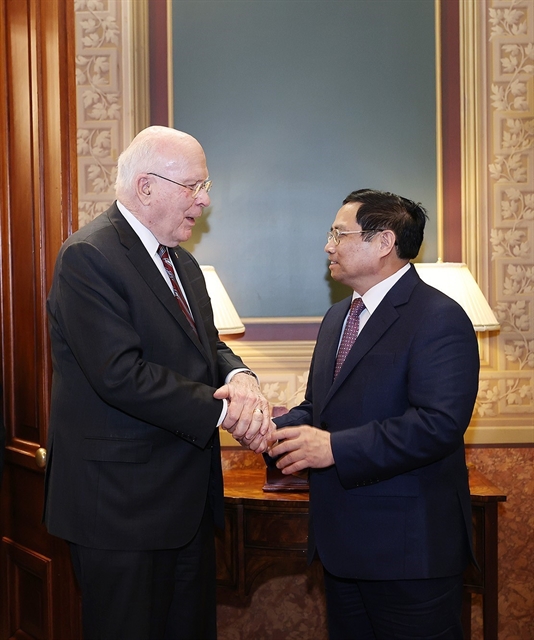 WASHINGTON — Prime Minister Phạm Minh Chính met President Pro Tempore Patrick Leahy and key US senators in Washington DC on May 11 (US time), as part of the Vietnamese leader’s trip to the US.

Chính affirmed that Việt Nam regards the US as a leading important partner, and stands ready to work with the country to promote the comprehensive partnership on the basis of respect for independence, sovereignty, territorial integrity and political institutions of each other.

The PM spoke highly of enduring efforts by the US senators, especially Leahy’s leadership in consolidating the two-party consensus in the US in supporting relations with Việt Nam, particularly cooperation in settling war consequences.

Chính expressed his hope that Leahy will continue to encourage generations of US senators to continue with the settlement work, thus contributing to enhancing the bilateral ties, matching wishes and legitimate interests of each side, for peace, stability, cooperation and development in the region and the world at large.

The Vietnamese leader also said he hopes that the two countries will foster their legislative ties, and conveyed National Assembly Chairman Vương Đình Huệ’s invitation to the President Pro Tempore to visit Việt Nam this year. Leahy accepted the invitation with pleasure.

He suggested Leahy work to push ahead with the establishment of a group of US senators friendly with Việt Nam and join efforts to step up all-level delegation exchanges as well as regular dialogue mechanisms between the two legislatures.

For his part, Leahy said the participating US senators have special sentiment towards Việt Nam, and highly valued the two countries’ efforts to overcome differences and the war-incited plight to build a better future.

The US Congress always has generations of senators that back the Việt Nam-US relations, he affirmed.

The US senators pledged that they will continue Leahy’s efforts after his retirement to enhance the relations, effectively handle issues of shared concern, and promote the Việt Nam-US comprehensive partnership.

They also expressed their interest in Việt Nam’s prospects for digital economy, along with the US’ capacity for support to the Southeast Asian nation in its transition to clean energy.

The senators said they wish to visit Việt Nam this year.

The two sides compared notes on regional and international issues of shared concern, including those regarding the South China Sea (called East Sea in Việt Nam), Myanmar and climate change.

Chính lauded the senators’ support for the Association of Southeast Asian Nations (ASEAN)’s centrality, as well as its viewpoints on regional matters, and reiterated Việt Nam’s consistent stance of addressing disputes peacefully in accordance with international law, not using or threatening to use force, and ensuring freedom and safety of navigation and aviation in line with the 1982 United Nations Convention on the Law of the Sea (1982 UNCLOS). — – VnExpress News