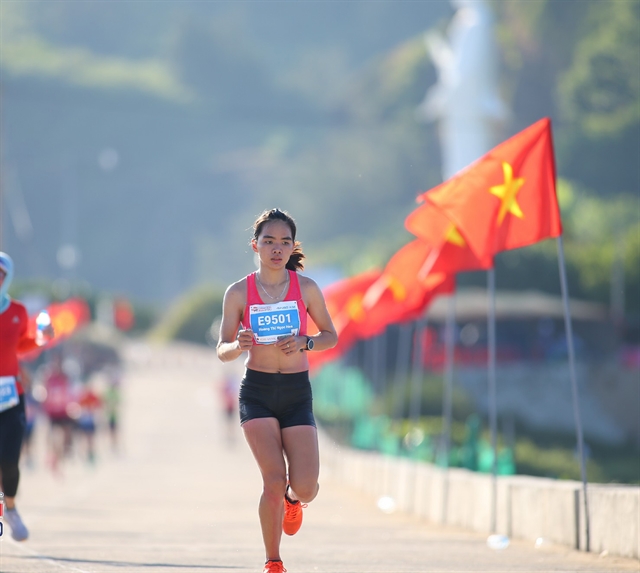 Petite and determined, Hoàng Thị Ngọc Hoa gave it her all on the race track on Côn Đảo Island. Her face was covered in sweat, but she kept running. Her legs did not rest for a second as she sprinted over the finish line.

Hoa was crowned the winner of the women’s title in the full marathon (42km) at the national Tiền Phong Newspaper Marathon on March 27.

She is now Việt Nam’s big hope to win its first SEA Games womens’ marathon gold medal since 2013 on home turf this summer.

Hoa was born in 2000 in the southern province of Bình Phước. Growing up and playing near 736m Bà Rá Mountain, the third highest mount in the southern region area, the girl was naturally fit and familiar with the terrain and gradually improved her physical strength.

The Mt Bà Rá Climbing Tournament is held annually in January, and Hoa is a regular competitor. She began running in 2016, and it took her only four years to secure her first national championship title.

“My first gold medal was in 2020 when the national Tiền Phong Marathon was held in Lý Sơn Island in Quảng Ngãi Province. I have etched the winning moment in my mind, and I will never forget it,” Hoa said.

It was a phenomenal year for Hoa, who passed veteran national team runner Phạm Thị Hồng Lệ, the title favourite, to take the top position and lift her career to a new height.

“It is the first time that I won at a prestigious tournament emotionally. From the 30km mark, I did not feel anything but thought, ‘I must go on to the finish’. I nearly collapsed at the finish line. It was a worthy victory after great efforts and many failures. The milestone win made me an official national team member, an honour for any athlete,” she said. 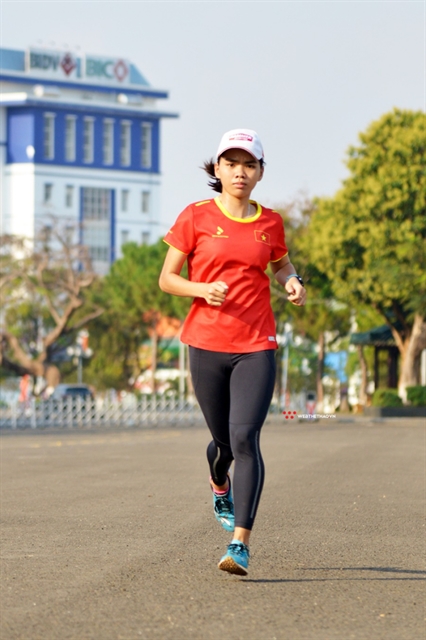 Hoàng Thị Ngọc Hoa says she was born to be a runner, and she loves marathons the most. — Photo webthethao.vn

The title marked a brilliant year of running as she got high results in different tournaments, including the HCM City International Marathon, where she set her personal best of 2:49.23.

“Hoa is not an ideal athlete for marathons because of her thick body, which is quite different from normal long-distance runners who are thin and firm. But she is hard-working and has an iron mind,” said Bùi Lương, a former coach from Bình Phước.

“Moreover, she knows how to push her energy to the maximum in decisive moments. She will go far if she can improve her technique and tactics.”

A year later, however, Hoa could not hold back tears when she came second and failed to defend the title due to a health problem just days before the race. Meanwhile, rival Lệ came back stronger and faster to take the limelight at the race in Gia Lai Province.

“This year, I am back to my favourite place. It is due to my strong effort and careful preparation of my team and coaches. People strongly encouraged and supported me. I must give a thank you to them,” Hoa said.

The marathon is the most challenging event in elite athletics, even for male athletes. The number of participants in the national championship has rarely been more than 10 in each category.

This year, for example, there are only five in both the men’s and women’s classes vying for the titles. The long duration and exhaustion in both training and competing have prevented athletes from choosing marathons.

But Hoa has made her choice and expects to go further.

Hoa’s fantastic performance has made her one of two of Việt Nam’s marathon representatives in this year’s SEA Games in Hà Nội in May. 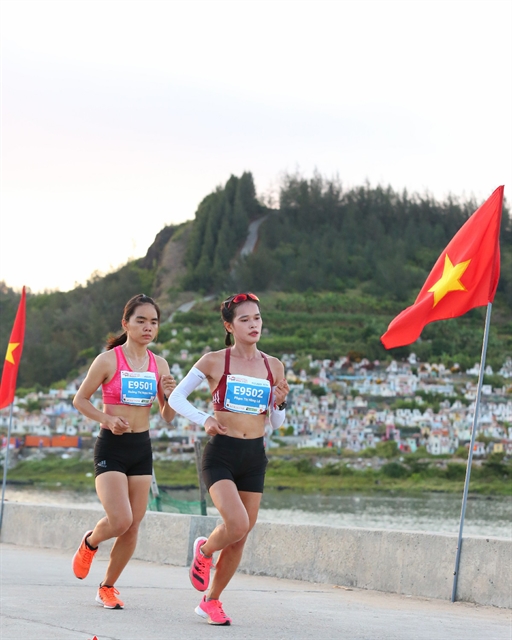 Hoàng Thị Ngọc Hoa (left) will be Việt Nam’s representative at the coming SEA Games in May. — Photo of Tiền Phong Marathon

They are expected to bring home a second women’s gold medal after a long time of waiting.

“Coming to Côn Đảo, I told myself to focus on running only. I didn’t know if I could win, but I was set to overcome my limitations. I will also compete in SEA Games for the first time this year, so this national championship is an important test,” Hoa said.

Phạm Thị Bình took home the nation’s first gold in the marathon after clocking 2:45.54, the national record, at the 2013 SEA Games in Myanmar.

Nearly a decade after the fantastic win of the bare-foot runner, Việt Nam is still waiting for its next celebration in the race.

“Hoa’s results are getting better step by step, and we hope she will compete well in the SEA Games,” Nguyễn Mạnh Hùng, general secretary of the Việt Nam Athletics Federation, said.

According to Hùng, this will be improved in Hà Nội because the SEA Games marathon track is different from Côn Đảo’s. It has eight laps on a flat road around the Mỹ Đình Stadium and will help her run faster.

Her main rivals will be a duo from the Philippines, who were top for the last two Games.

“My small stature may be a disadvantage when I compete in the coming Games, but I will make up the gap through hard work and fixing errors to improve my result,” Hoa said.

“I will move to Hà Nội later this month to get familiar with the climate and the running track. I think that the route is quite suitable for runners to get high results, although we will have to run repeatedly around Mỹ Đình for many laps.

“I have set a target to be the highest on the podium at this Games.” — VnExpress News