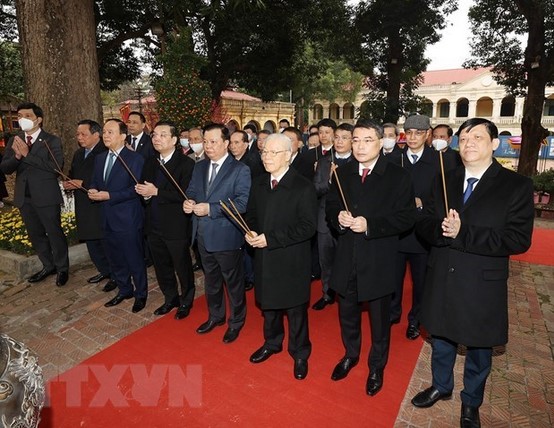 HÀ NỘI– Party General Secretary Nguyễn Phú Trọng offered incense in tribute to the late kings and talented persons who had made contributions to the nation at Kính Thiên Palace in the Thăng Long Imperial Citadel in Hà Nội on Friday, the fourth day of the Lunar New Year.

The Party leader affirmed the resolve to uphold Vietnamese traditional values and strengthen the great national unity bloc to build a nation of wealth, democracy, equality and civilisation.

Talking with the staff of the relic site, he urged them to work harder to preserve and promote values of the UNESCO-recognised citadel to international friends and contribute to educating young generations about national traditions.

The Thăng Long Imperial Citadel, which was placed on the UNESCO list in August 2010, was a power centre for over a thousand years of Vietnamese history and unique evidence of Vietnamese civilisation during the development of monarchies in Southeast Asia and East Asia.

Kính Thiên Palace is the main building in the central sector of the citadel, located in what is today downtown Hà Nội. It sits in the centre of the complex, facing Đoan Môn (the south gate) and the Flag Tower.

The palace was built in 1428 and is believed to be of the highest importance, hosting many royal ceremonies. It was also the place where royals were invited to discuss national issues.

It was almost destroyed at the end of the 19th century by the French colonialists, however, and all that remains today is a 100-cm-high bannister to the south of the plot and several large stone steps with dragon carvings. VNA