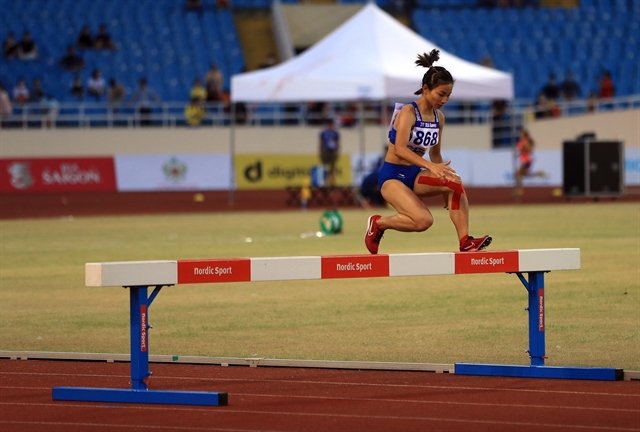 Oanh finished first in the women’s 3,000m steeplechase with a time of 9min 52.46sec, setting a new Games record.

Reigning champion Oanh separated from the pack from the first steps. She made an outstanding solo burst for the finish line, leaving all others far behind.

Oanh was surprised looking at the electric board and found that her result was a new record.

“I could not believe it is a record,” Oanh told the media. “I am so happy with this result. We have prepared much for the tournament,” said Bắc Giang-born Oanh.

“I made it, it was so wonderful,” Oanh yelled in front of many supporters at the Mỹ Đình Gymnasium.

It was Oanh’s third gold this SEA Games, making her the current best athlete. Earlier, she won the 1,500 and 5,000m events.

Earlier, De Deus ran in front of the stands to cheer with his supporters after finishing second in the men’s 5,000m event.

After three official days of the Games’ competitions, in which some events started on May 6, this was the first Timor Leste athlete to climb the podium.

De Deus came second to Việt Nam’s veteran Nguyễn Văn Lai, who returns to his throne after losing to the Thais three years ago.

Lai took his gold with a time of 16:34.12. He left his nearest opponent 20m behind when they drew near the finish line. Safe in his victory, the Lai’s celebrations began before he reached the finish line.

“Competing under such huge support of nearly 10,000 fans is either exciting or nervous. I ran pretty well while my No 1 rival (Kieran Tuntivate of Thailand) got injured, so I took my chance and won,” Lai said. He will run the 10,000m event in the next few days.

The Philippines on May 15 set a new Games record in the men’s shot-put when William Morrison III made a throw of 18.14 m.

Thailand won one gold in the men’s 400m event with Joshua Atkinson passing Vietnamese contenders behind to take the limelight.