No Vietnamese citizens hurt in Ukraine as evacuation flights are readied: Foreign ministry 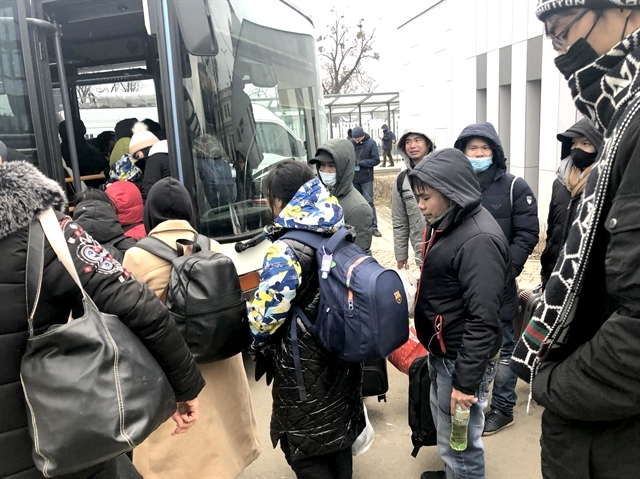 HÀ NỘI — No Vietnamese nationals in Ukraine have been hurt during the current armed conflict and evacuation efforts are underway to bring them to safety. Ministry of Foreign Affairs Spokesperson Lê Thị Thu Hằng gave the update on Thursday during a regular press briefing.

Vietnamese people in Ukraine have been evacuated from the conflict-affected regions and have left Ukraine via many different means; with the support of Việt Nam’s diplomatic missions in Ukraine and neighbouring areas, through local Vietnamese associations and, in some cases, on their own.

As of Thursday noon, most Vietnamese citizens had travelled out of Kyiv and Odessa, and hundreds in Kharkiv have been evacuated from the war zones by road to neighbouring countries.

Around 400 have arrived in Moldova and are on the way to Romania, 140 are in Poland, 70 in Romania, 33 in Slovakia and 30 in Hungary. As no flights can operate from or over Ukraine, they will instead be able to fly home from these countries.

“Vietnamese representative agencies in Ukraine, as well as neighbouring areas, are continuously providing updates and information via the citizen protection hotline, and receiving updates from the association and communities to ascertain the number of Vietnamese citizens in need of support, in order to provide assistance in a timely manner,” the spokesperson said.

The ministry has also requested agencies of the United Nations and countries in the region to coordinate in ensuring essential conditions, security, safety, and evacuation of Vietnamese nationals.

Vietnamese representative agencies have provided support in terms of procedures and documents for people for entry, transit and stay, and coordinated with local authorities and Vietnamese associations to welcome and arrange temporary accommodation and essential items for them.

“The Ministry of Foreign Affairs has coordinated with ministries and airlines to report to the Prime Minister the plan to evacuate Vietnamese citizens by air. This is the most important task, the highest priority at the moment,” Hằng stressed, adding that the specific details – including routes, conditions, and fees if applicable – will be made public in a transparent manner.

The first flight is expected to go to Warsaw on March 5 morning and will be conducted by the national carrier Vietnam Airlines, Sơn said, though permission from Poland has yet to be granted.

The second flight will go from Bucharest, Romania and is planned to be conducted by Bamboo Airways, he added.

Vietnamese carriers are also ready to fly to any other places under the Government’s plan to ensure the safety of Vietnamese people and their families in Ukraine, and to help them return home, the official said.

There are about 7,000 Vietnamese citizens in Ukraine, according to the foreign ministry.

Asked about the UN General Assembly’s resolution on Ukraine, adopted on March 2 (US time), Hằng said Việt Nam remains deeply concerned with the armed conflict in Ukraine that is threatening to disrupt peace and stability in the region and the world.

She reiterated that Việt Nam shares the ASEAN Foreign Ministers’ Statement on ‘The Situation in Ukraine”, released on February 26, 2022, as well as the speech by the head of the Vietnamese permanent delegation to the UN at the General Assembly’s special session on March 1, 2022.

“We believe that the priority at hand is to exercise utmost restraint, immediately cease the use of violence to avoid incurring losses and injuries to innocent civilians and to resume dialogue and negotiations through all channels, so we can achieve a long-term solution that takes into account the interests and concerns of all relevant parties, in line with the UN Charter and the fundamental principles of international law,” the spokesperson stressed.

A UN General Assembly resolution demanding Russia immediately withdraw all its military forces from Ukraine was passed on Wednesday, with 141 countries voting in favour, five against; 35 countries – including Việt Nam – abstained.

The resolution is not legally binding but reflects international opinion. — VnExpress News