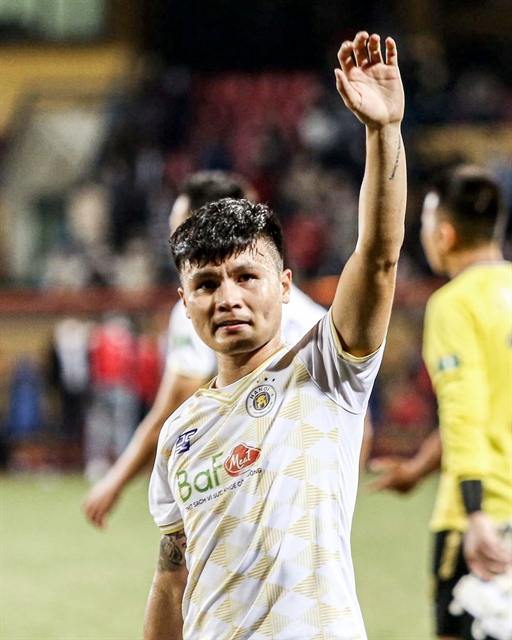 Midfielder Nguyễn Quang Hải says goodbye to fans after the match between Hà Nội and Viettel FC in the V.League 1 on Monday. Photo yan.vn

HÀ NỘI — Hà Nội FC coach Chun Jae-ho has admitted that he faces an uphill struggle to replace midfielder Nguyễn Quang Hải at this current time, stating no one currently available will be able to fill his boots.

The South Korean coach was speaking after the derby match between Hà Nội and Viettel FC on Monday, which was probably Hải’s final appearance for the club.

After the 1-0 victory for the home side, coach Chun said: “I have enjoyed working with Hải.

“It’s unfortunate that he didn’t renew his contract with the team, but it’s good for him. After he leaves, we have two months left to work with the rest of the players to find the best solutions.

“In my opinion, no one in the V.League 1 can replace him now.”

He will leave the club on April 12, when his contract ends, and although his team face the People’s Police in the qualifying round of National Cup on April 7, the midfielder is unlikely to feature.

Hải couldn’t mark his last appearance with a goal, but helped his side to victory thanks to a strike by Trương Văn Thái Quý in the 61st minute.

After the match, Hải went to the stands to thank the fans and threw his shirt to supporters.

“This was a difficult match for Hà Nội,” Hải said.

“The most important thing is that the whole team fought until the last minute and won three points.

“This was my last match in the V.League 1 and I can think of nothing better than winning three points.

“This win is dedicated to the fans. I hope they will always support the club in the future.”

In response to Hải’s affection, the fans chanted his name after the match.

He added: “I am very touched. I thank the fans who have always given me support and encouragement.

“Today, I have to also thank my teammates. Under any circumstances, we still work together to get the victory.

“In the past two years, Hà Nội has not had the best results, but I think Hà Nội is a team with strong traditions.

“When the confidence returns, they will take a worthy position with what they have built in the past. Motivation from the fans will help the team.”

The midfielder was keeping tight-lipped about where he will next play.

He said: “Any player wants to adapt and integrate well with the new team. I hope I adapt quickly to develop in the right direction. I have to prepare a lot for the next journey, but this is a good time to show my ability.”

Hà Nội FC chairman, Đỗ Quang Hiển said: “I always wish Hải success. He will always be a footballer of Hà Nội. Wherever he goes, there will be victory. Come back with victory, no worries.”

One possible destination for the midfielder could be France, after he agent hinted he could be moving to Paris. VnExpress News