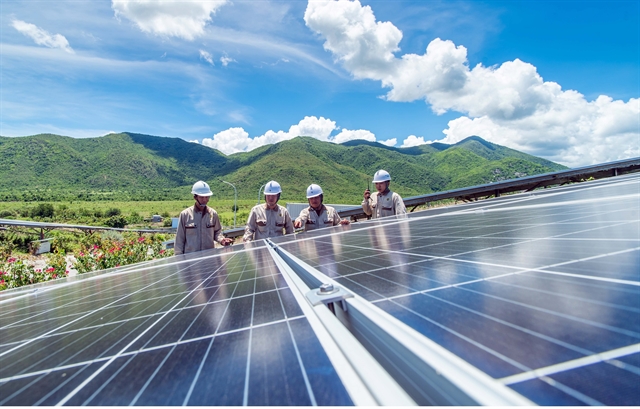 That was the message from Vice Chairman of Ninh Thuận People’s Committee Phan Tấn Cảnh as he addressed the Asia virtual conference.

Ninh Thuận is a locality that has great potential in renewable energy development, such as wind power and solar power, as the coastal locality is blessed with abundant sunshine and wind. It has wind speeds of 7.5 metres per second, the highest rate in the country, for 10 months of the year, making it ideal for reliable operations of wind turbines and wind power development, Cảnh said.

As for sunshine, the province gets more than 2,800 hours of sunshine per year, also the highest in the country, with average solar radiation of 1,780-2,015 kWh per year, which is ideal for solar power generation.

Ninh Thuận is also home to the Cà Ná seaport complex, which is able to handle commercial LNG ships with a capacity of up to 250,000cu.m. The port is located next to a 6,000MW gas power plant complex and the Cà Ná Industrial Park, which is convenient for liquefaction, making Ninh Thuận the best clean energy development location in the southern region, the official noted.

With such potential, Ninh Thuận has attracted investment in a large number of renewable and clean energy projects, one of the province’s socio-economic development priorities.

Over the years, Ninh Thuận has received consistent support from the National Assembly, the Government, ministries, and sectors, especially since the Government issued Resolution 115/NQ-CP dated August 31, 2018, on specific mechanisms and policies for the province’s socio-economic development in the 2018-23 period.

Under the resolution, the Government gave approval for Ninh Thuận to develop into a national renewable energy hub, according to the provincial leader.

To implement this policy, the provincial Party’s Committee issued Resolution No.20-NQ/TU dated January 25, 2022, to build the province into a renewable energy hub of the nation by 2025 with a vision to 2030.

The provincial Party’s Committee also issued Plan No. 239/KH-TU dated May 26, 2020, to implement the Politburo’s Resolution 55-NQ/TW on the National Energy Development Strategy by 2030 with a vision to 2045.

Cảnh said: “The resolution and plan by the provincial Party’s Committee demonstrates its steadfast leadership in promoting the province’s strengths in the energy sector, especially renewables, ensuring energy security, promoting sustainable development of the sector, and mobilising all the resources needed to turn the province into the country’s renewable energy hub.”

During the remarks, he also attributed a number of positive impacts in the province’s socio-economic development to renewable energy development.

Renewable energy development has achieved a breakthrough and transformed the economic structure, contributing to the province’s socio-economic development.

By the end of 2021, the province was home to 53 renewable energy projects (11 wind power plants, 32 solar plants and 10 hydropower projects) with a total capacity of 3,176.5MW connected to the national grid, he said, stressing that they generated 6.3 billion kWh of electricity last year, creating added value of VNĐ3.614 trillion ($158 million), up 59.8 per cent from three years earlier and contributing 6.84 per cent to the province’s economy in 2021.

Developing renewable energy projects has enhanced land use efficiency, especially the value of land areas deemed not suitable for agriculture, the official claimed.

Cảnh added: “The annual value added by unproductive agricultural land is only VNĐ10 million per hectare compared with VNĐ3.84 billion (equivalent to 1.92 million kWh per hectare) when the land is used for solar power production.”

He also welcomed ability of wind and solar power generation to create jobs. In 2021, the renewable energy industry provided jobs to around 6,000 people, accounting for 2.3 per cent of the total number of employees working in six important economic sectors in the province.

He pledged that the province will give priority to power projects using state-of-the-art technology and requiring the least amount of land.

“Battery panels in solar systems must have high capacity and use tracking technology to rotate in the direction of the largest solar radiation. Priority will be given to large capacity wind turbines,” he said.

The renewable energy sector is one of Ninh Thuận’s three economic pillars alongside tourism and agriculture, and has propelled the province into the list of five localities with the fastest economic growth rate in the last five years, according to the provincial representative.

“The sector has also created a driving force for the development of other industries such as real estate, construction, trade, and services, effectively exploiting uncultivated and dry lands, contributing to improving transport infrastructure for the operation of energy plants and serving production activities and people’s travel needs.”

“Ninh Thuận has become the country’s leader in renewable energy by turning difficulties into advantages for sustainable development,” the province’s vice chair said.

However, Cảnh also expressed inhibitions about some negative impacts from the “overdevelopment” of renewable energy.

“The number of projects has increased too rapidly in a short time, leading to a deterioration of roads where they are concentrated,” he said.

“Fumes and dust caused by vehicles transporting equipment in the area have negatively affected the environment and people’s lives.”

The rapid development of rooftop solar of under 1MW at farms has affected transmission in the power grid as well, Cảnh added.

From 2017 to September 2020, one of the biggest challenges was the lack of compatibility between power projects and transmission lines, resulting in overloading and preventing plants from operating at full capacity.

In early 2021, due to the impacts of the COVID-19 pandemic, factories stopped or reduced production, and power demand fell as a result, leading to oversupply of electricity, and so the province had to reduce the output of power plants, according to Cảnh.

Still, the province will persevere with its renewable hub vision given the huge potentials, he said, adding that Ninh Thuận also wants the Government to direct the Ministry of Industry and Trade to include its power source and grid in the National Power Development Plan by 2030 with a vision to 2045. — VNS

Q: To realise the province’s ambition to become a renewable energy hub, Ninh Thuận would need a lot of foreign investments. What are the policies or incentives for attracting FDI into this field?

A: Renewable energy projects (wind power and solar power) are under the list of industries applicable for favourable investment incentives in Ninh Thuận Province.

All districts in Ninh Thuận are also considered areas with extremely difficult economic conditions according to Decree No.31/2021/NĐ-CP (dated March 26, 2021) on implementing several articles of the Law on Investment.

Therefore, investment projects in renewable energy in the province’s districts are eligible for the most favourable incentives in the framework of the State for land lease, land allocation and corporate income tax, according to the Law on Land, Law on Corporate Income Tax, and Law on Import-Export Tax:

– Corporate income tax: A tax rate of 10 per cent is applied for the first 15 years since taxable income is made (for domestic businesses, the rate is applied for the entire duration of the project). Tax exemption is applicable for four years and 50 per cent reduction for the next nine years.

– Import tax: Projects are exempt from import tax on imports of necessary machinery and equipment.